2 dead, 20 injured after train collides with truck in Italy 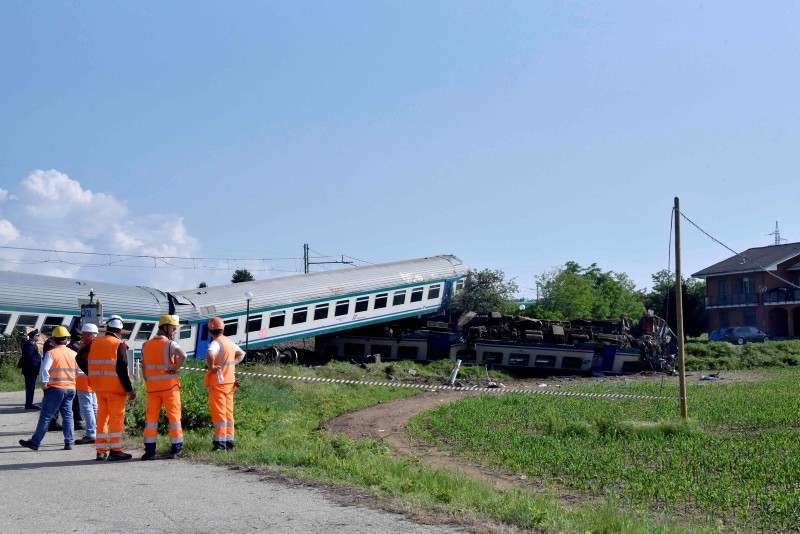 Police and railway technician work at the site of a crash after a regional train plowed into a rig truck that had stopped on the tracks in Caluso, outside Turin on May 24, 2018. (AFP Photo)
by Compiled from Wire Services May 24, 2018 12:00 am

At least two people are dead and 20 injured after an overnight collision between a train and a truck near Turin, Italy, according to media reports on Thursday.

Four of the injured are in serious condition, according to reports. The driver was one of the dead; the other was a passenger who died on the way to hospital.

The accident happened when a regional train collided with a truck at an intersection in the country's north. The engine and two train cars derailed.

"At 11:20 pm (2120 GMT) the regional train 10027 Turin-Ivrea hit a heavy goods vehicle that had stopped on a functioning level crossing after crashing through the barriers," RFI, which manages Italy's rail network, said in a statement.

Local police said there were between 40 and 50 people in the train, which was the last one running from Turin to the suburb of Ivrea.

Paolo Malgioglio, 23, told the Corriere della Sera newspaper: "Everything happened so fast, I felt the train brake suddenly and then I found myself in hell and around me everything was black."

The tragedy follows another accident in April 2017 in the north that killed two people and resulted in the temporary closure of the main railway line between Italy and Austria.

In July 2016 a collision between two trains in the south of Italy left 23 people dead and 52 others injured.