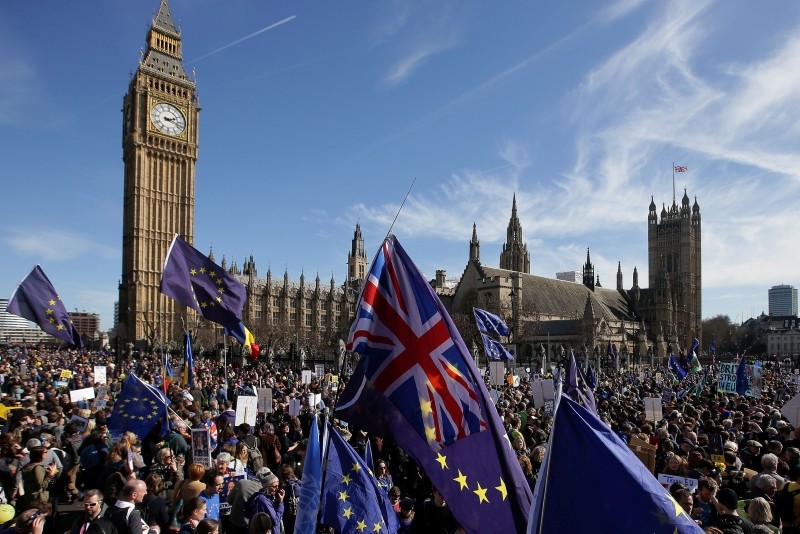 Demonstrators holding EU and Union flags gather in front of the Houses of Parliament in Parliament Square following an anti Brexit, pro-European Union (EU) march in London on March 25, 2017. (AFP Photo)
by Jun 01, 2018 12:00 am

The United Kingdom is considering attempting to break the deadlock in Brexit negotiations with a proposal to give Northern Ireland joint UK and European Union status so it can trade freely with both, a government official said.

The government has considered proposing a 10-mile (16-km)- wide trade buffer zone along the border for local traders like dairy farmers after the UK leaves the bloc, said the official, who spoke on condition of anonymity.

The plan is one of several ideas being discussed and may not be proposed to the EU, the official said.

A spokeswoman for the Department for Exiting the European Union declined to comment. It was not immediately clear whether the EU would accept such a proposal.

The plans are likely to be opposed by the Northern Irish party, the Democratic Unionist Party, that supports Prime Minister Theresa May's minority government and has said it would oppose any Brexit deal that sees the province operate under different regulations to the rest of the United Kingdom.

Both the UK and the EU are committed to keeping a free flow of people and goods over the Irish border without returning to checkpoints — symbols of the three decades of violence in the region largely ended by the Good Friday Agreement of 1998.

However, finding a practical solution for any customs checks needed after Brexit is proving elusive.

The government is considering a special economic zone that will mean traders, who constitute 90 percent of cross-border traffic, can operate under the same rules as those south of the border, according to The Sun newspaper, which first reported that the idea was being considered.

May previously pledged to take the UK out of the EU customs union by considering two options. One would be "max fac" in which the UK and EU would be entirely separate customs areas but would try to use technology to reduce friction and costs at the border.

The other option being considered is a "customs partnership", according to which the UK would cooperate with the EU more closely and collect tariffs on its behalf with no requirement of declarations of goods crossing the border.

EU officials are warning time is running out to seal a Brexit deal this year because there has been not enough progress in negotiations, and have criticized May for not setting out how the UK would achieve a frictionless border with the EU without erecting a land border on the island of Ireland.

London suggested earlier this month that it would be willing to extend the use of EU tariffs as a backstop if there were delays in ratification of a Brexit deal to avoid a return to a hard border between Northern Ireland and Ireland, adding the government did not want to use that option.