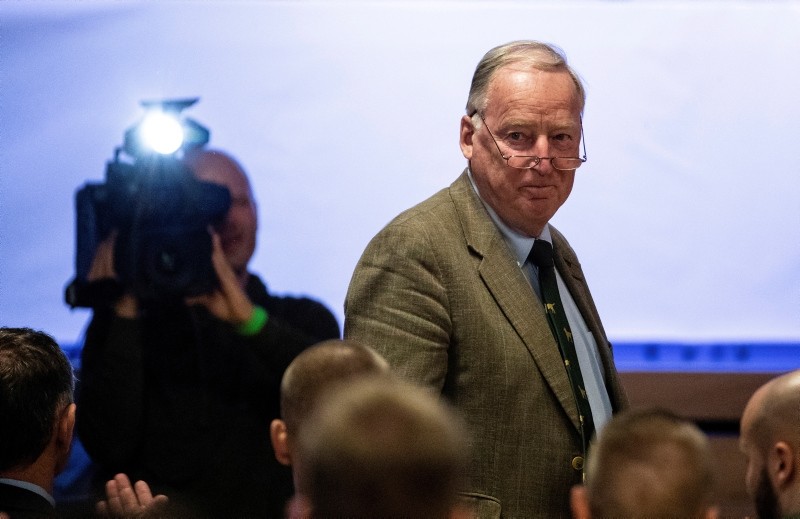 Alexander Gauland, co-faction leader of the Alternative for Germany, AfD at the federal parliament Bundestag. (DPA via AP)
by Jun 02, 2018 12:00 am

One of the leaders of Germany's far-right AfD party sparked outrage Saturday by downplaying the crimes of Adolf Hitler and the Nazis, saying they were "just a speck of bird sh.t in over 1,000 years of successful German history."

The Alternative for Germany (AfD) is the biggest opposition party in Germany's lower house of parliament, the Bundestag, with more than 90 deputies.

In remarks reported by Deutsche Welle and the German news agency DPA, Alexander Gauland, co-leader of the anti-immigrant, anti-Islam party, told a youth party congress that there was more to the country's history than the 12 years of the Nazi regime.

"Yes, we plead guilty to our responsibility for the 12 years" of Nazi rule, he said.

But "we have a glorious history and one, my dear friends, that lasted a lot longer than those damned 12 years," Gauland said.

"Hitler and the Nazis are just a speck of bird sh.t in over 1,000 years of successful German history."

Gauland has repeatedly attacked Islam, and argued that Germany should be proud of its veterans of two world wars.

In 2016, he took aim at star footballer Jerome Boateng, who was born in Berlin to a German mother and a Ghanaian father.

"People find him good as a footballer, but they don't want to have a Boateng as a neighbor," Gauland said.

The head of Angela Merkel's conservative Christian Democrat Union party quickly hit out at Gauland's latest remarks on Saturday, saying that the AfD was revealing its true face.

"50 million war victims, the Holocaust and the total war are nothing more than 'bird sh.t' for the AfD," she tweeted. "That's what the party really looks like behind its bourgeois mask."

Set up in 2013 as an anti-euro party, the AfD recorded a surge in support after it began capitalizing on unease in Germany over the arrival of more than a million asylum seekers since 2015.