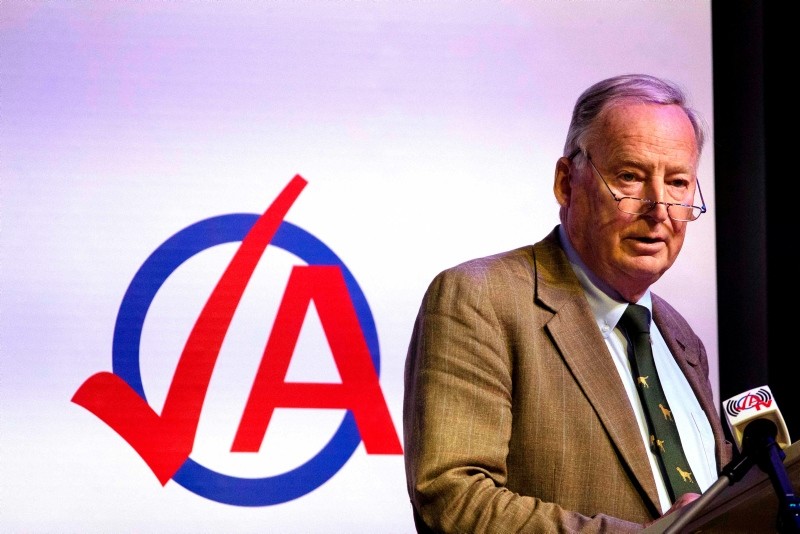 Federal spokesman of the far-right party Alternative for Germany (AfD) Alexander Gauland speaks during the party congress of the party's youth party ,Junge Alternative, in Seebach, eastern Germany, on June 2, 2018. (AFP Photo)
by Compiled from Wire Services Jun 04, 2018 12:00 am

The German government took exception on Monday to comments made by a leader of the far-right Alternative for Germany (AfD) party, saying they trivialized the Nazi era.

AfD leader Alexander Gauland raised hackles on Saturday when he told a gathering of the party's youth wing that "Hitler and the Nazis are just bird shit in more than 1,000 years of successful German history."

The government "strongly rejects" any relativization or downplaying of National Socialism, government spokesman Steffen Seibert said on Monday in Berlin.

"It is shameful that we have to deal with such statements from a parliamentary representative," Seibert said.

Gauland later said that there was no way the "bird shit" comment could be seen as an endorsement of Nazism or a mockery of the fascist movement's victims, adding that he had wanted to make the point that centuries of positive German actions often get overlooked by a focus on the Nazis.

The comments unleashed a storm of criticism in Germany, including from President Frank-Walter Steinmeier who accused Gauland of minimizing the pain of the victims and seeking to sow new hatred.

"We must all stand against this," Steinmeier said.

Charlotte Knobloch, the former President of the Central Council of Jews in Germany, said that Gauland's comments revealed an "inhumane ideology, which is in truth anti-German."

"Those hyper-moralists who ... with their [open-door refugee policy] have allowed our social security system to be plundered and our internal security to disintegrate... have in my eyes forfeited their right to make moral judgments about the AfD," Hoecke said.

The Nazi dictatorship remains a highly sensitive issue in Germany more than seven decades after its defeat. Germany has built its post-World War Two identity on the principle of keeping alive the memory of the six million Jews murdered by the Nazis and a commitment to Israel's right to exist.

Gauland said his comments had been misunderstood or misinterpreted and added that he had expressed his "deepest contempt" for National Socialism in the speech he made to the AfD's youth wing on June 2.

"For me, 'bird shit' is and remains the lowest piece of filth - animal excrement that I compared National Socialism with," he said in a statement.

"It was never my intention to trivialize or even deride the victims of this criminal system," he said.

AfD co-leader Joerg Meuthen told Zeit Online that Gauland's choice of words was "inappropriate" but added it was clear from the whole speech that Gauland was not playing down or relativizing Nazi atrocities.

The AfD's federal board said in a statement it was dismayed by the youth wing singing stanzas that are no longer part of the national anthem at the event where Gauland spoke.

The first stanza, with its words "Germany, Germany above all else" - which stemmed from efforts to unify Germany in the 19th century - was officially dropped from the anthem in 1991 following reunification, as was the second stanza.