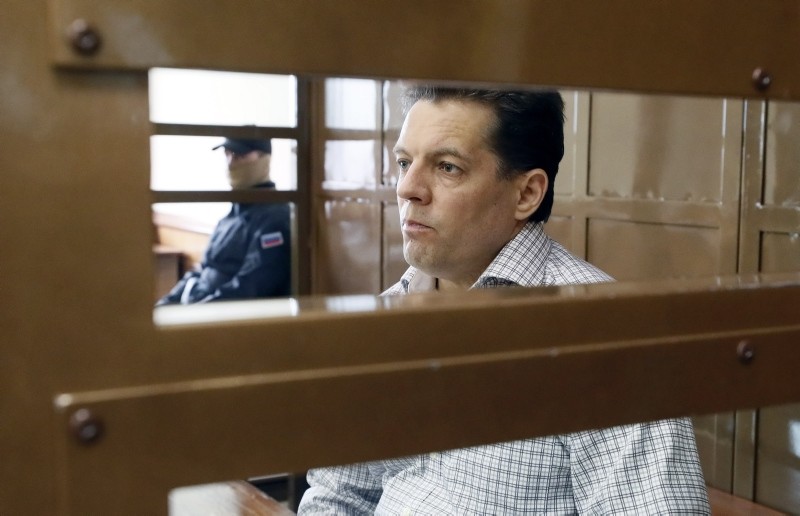 Ukrainian journalist Roman Sushchenko looks on inside a defendant's glass cage prior to his verdict hearing at the Zamoskvoretsky district court in Moscow, Russia, June 4, 2018. (EPA Photo)
by Compiled from Wire Services Jun 04, 2018 12:00 am

A Russian court sentenced a Ukrainian journalist, Roman Sushchenko, to 12 years in jail on Monday after convicting him of spying for his native Ukraine, in a case Kiev has condemned as "politically motivated."

Sushchenko, who worked for Ukrainian state news agency Ukrinform for more than a decade, was detained in Moscow in 2016. Russia's Federal Security Service (FSB) accused him of serving in Ukrainian military intelligence and gathering state secrets.

The 49-year-old reporter's lawyer, Mark Feigin, earlier told AFP that prosecutors had asked for a 14-year sentence, out of a maximum of 20 years.

Feigin said he would appeal against the verdict Tuesday. He posted a picture of his client being held in a glass courtroom cage shortly before the verdict was announced.

The case comes amid a recent uptick in violence in the conflict between Ukrainian troops and Russia-backed separatists in eastern Ukraine that broke out following Russia's annexation of Crimea from Ukraine in 2014 and has killed more than 10,000 people.

Sushchenko was working as Ukrinform's Paris correspondent at the time of his arrest and the news agency said that he was detained while visiting Moscow on holiday.

In his final speech in court he said he was framed by the Russian security service, his lawyer told Interfax news agency.

Feigin earlier suggested Moscow and Kiev could be planning a prisoner exchange since a journalist working for Russian state news agency RIA Novosti is now in detention in Ukraine awaiting trial on treason charges.

The journalist, Kyrylo Vyshynsky, has dual Russian and Ukrainian citizenship.