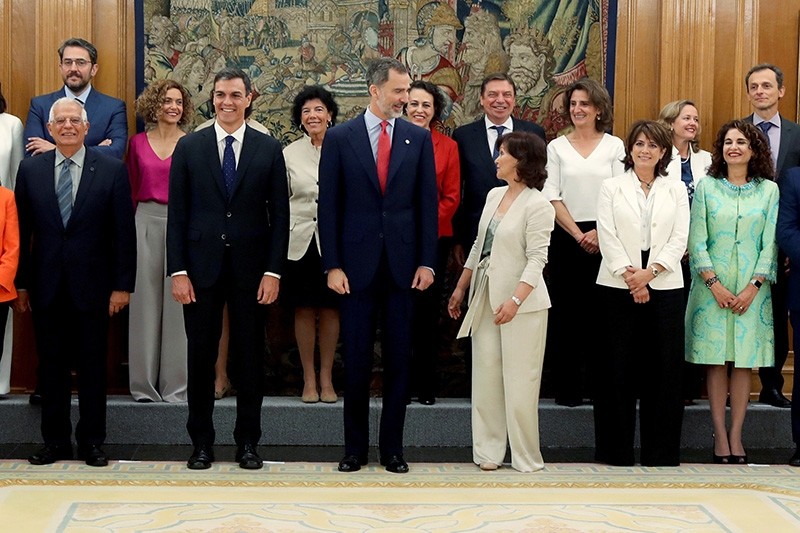 Spain's new Prime Minister Pedro Sanchez has filled 11 of his 17 cabinet posts with women, the highest proportion in all of Europe.

Women were given the top jobs in Sanchez's cabinet, including defense, economy and finance.

The socialist leader's choice was a sharp contrast to his predecessor ex-PM Mariano Rajoy, who stocked his cabinet with male executives.

Sanchez chose his cabinet from a variety of occupational backgrounds, including appointing a former astronaut as science minister.

Some have described Sanchez's choice as a "feminist cabinet."

With 61.6 percent of the government led by women, Sanchez has made national history and topped Europe's government proportions. France and Sweden are the only other European states to have at least 50 percent of ministerial positions filled by women.

The prime minister has said his new government consists of people who "shared the same vision of a progressive society that was both modernizing and pro-European."

Sanchez said his executive was "a reflection of the best in society" -- a society he described as composed of women and men, old and young, rooted in the European Union.

But it is also a minority government, as the Socialists only have 84 lawmakers in the 350-seat parliament.

As such, the government will have a tough time governing Spain, relying as it will on the votes of far-left party Podemos as well as Basque and Catalan nationalist lawmakers who supported his no-confidence motion.

The new government is due to take an oath before King Felipe VI on Thursday.

Calvo, who was culture minister from 2004 to 2007, will also be in charge of equality, a priority for Sanchez's government in a country where women staged an unprecedented strike to defend their rights on March 8.

Fernando Grande-Marlaska, a former judge at Spain's top-level National Court, where he took on cases against Basque separatist group ETA, will head up the interior ministry.

Women will also lead the economic team of Sanchez's government, whose "main priority" will be to respect Madrid's deficit reduction commitments to the EU, the new prime minister has said.

Spain has promised to reduce its deficit to 2.2 percent of GDP in 2018, thus finally going under the 3 percent limit set by Brussels.

The new economy minister will be Nadia Calvino, who is director general for budget at the European Commission and has a 12-year experience in high-level postings in Brussels.

Maria Jesus Montero, meanwhile, will become budget minister after playing a similar role at a regional level in southern Andalusia.

In the name of maintaining "stability," Sanchez has also promised to implement the 2018 budget crafted by the previous conservative government.

Among the budget's key measures are a one to 3 percent rise in the lowest pensions and a salary increase for civil servants, ahead of municipal, regional and European elections next year.

And the man to take that role is Spain's first astronaut Pedro Duque.

As Brexit gathers pace, and with Italy now led by a eurosceptic, populist government, Spain's new executive is distinctly pro-EU.

Apart from Calvino's appointment as economy minister -- a move welcome by the EU Commission -- Borrell was European parliament president between 2004 and 2007.

A Catalan who is fiercely against the independence movement in his home region, he will be tasked with defending his government's commitment to Spanish unity abroad.

Borrell has said the previous conservative government was "very bad" when it came to public relations abroad on the Catalan separatist issue.

On a day-to-day basis, Meritxell Batet, another Catalan, has been put in charge of relations with Spain's regions.

As such, she will have the prickly task of trying to ease the situation in her own deeply divided home region.