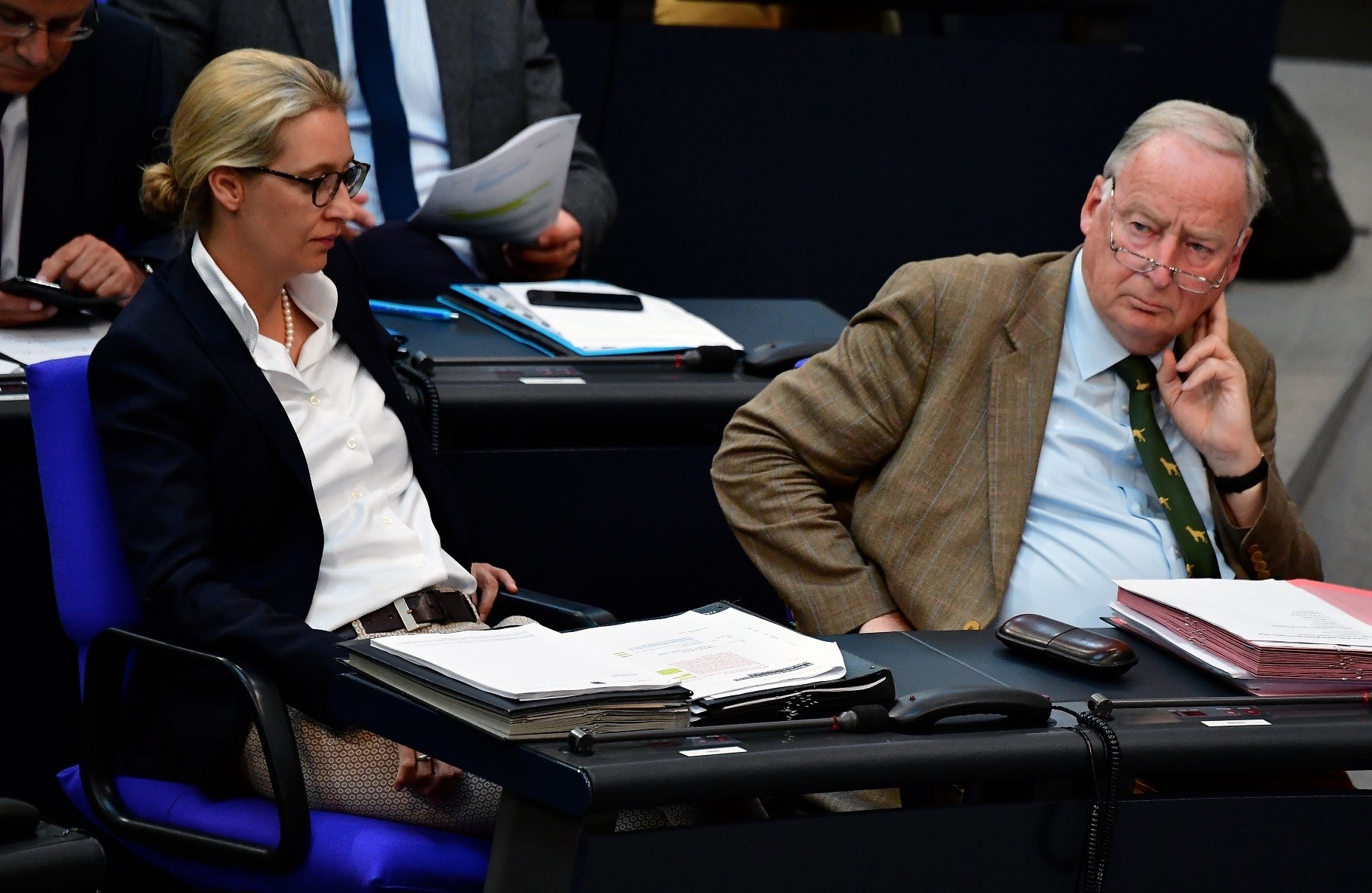 Alice Weidel (L) and Alexander Gauland, co-leaders of the parliamentary group of the AfD in the Bundestag, June 6.
by Daily Sabah with Wires Jun 08, 2018 12:00 am

Three weeks before a European Union summit at which reform plans are due to be discussed, the Eurosceptic Alternative for Germany (AfD) took aim at some elements of the banking union and some of French President Emmanuel Macron's eurozone reform proposals. German Chancellor Angela Merkel and Macron are due to present a joint plan for overhauling Europe at the meeting on June 28-29.

The AfD's motion could strike a chord with some of Merkel's conservatives, many of whom are skeptical about any steps that would push liability for other countries' debts on to taxpayers in Germany, Europe's largest economy.

The AfD, which was set up in 2013 to protest against bailouts but has since morphed into an anti-immigrant party, said the ESM should instead be wound down to stop losses from bank insolvencies being passed on to European, and German taxpayers, in particular.

AfD lawmaker Bruno Hollnagel, who focuses on eurozone issues and is a member of the parliamentary financial committee, told Reuters an EMF would be a way to transfer funds around the bloc and undermine national parliaments' financial sovereignty.

"The EMF would basically be a bank in which the finance ministers decide on policy, the bank can decide how much money it has, and the bank can decide to whom it gives money and on what conditions without it being subject to a banking supervisor," Hollnagel said.

One of the proposals to be discussed at the summit is a common backstop for failing banks. The AfD said introducing such a scheme would be "irresponsible" and that if banks knew they could get funds from the ESM or EMF if necessary, they would be tempted to take inappropriate risks.

Concerns about reform proposals were also voiced last month by a group of 154 prominent German economists, who dismissed Macron's plans for the eurozone as risky and said the single currency bloc must not become a union sharing liabilities.

In the motion, the AfD said the ECB should be stripped of its task of banking supervision, with Hollnagel saying its role as a lender meant it was not independent enough to supervise.

One element still missing from the banking union is a European Deposit Insurance Scheme (EDIS) for the entire eurozone, which would bolster the confidence of savers and protect deposits of up to 100,000 euros in any eurozone bank. France wants Germany to commit to a clear timeline on EDIS.

The AfD, which entered parliament in September with around 13 percent of votes, said deposit guarantees should remain at the national level to reduce or prevent risks and to stop risks being transferred from the national to the European level.

Many conservatives are also skeptical about increased risk sharing among eurozone members, with one saying in April that conservative lawmakers were "far, far away" from backing EDIS.

On Macron's idea for a eurozone budget, Hollnagel said Germany would ultimately be left footing the bill, adding: "It's about opening a new channel for transfers – they want to have another new source of money."