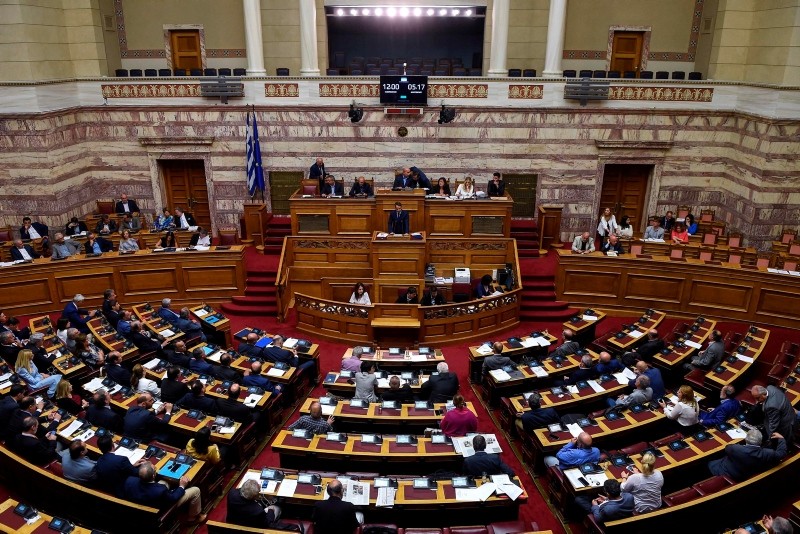 Greece's main opposition New Democracy party on Thursday called a censure vote against the government in a bid to block a name deal with Macedonia seen as "harmful" to Greek interests.

"This is the last straw," New Democracy leader Kyriakos Mitsotakis told parliament in calling the vote.

"We will not divide the Greeks in order to unite the (Macedonians)."

Prime Minister Alexis Tsipras -- whose government is expected to defeat the motion -- this week agreed with Macedonian counterpart Zoran Zaev to rename Greece's northern neighbor the Republic of North Macedonia.

The censure vote will be held over the weekend, delaying reported plans for the Tsipras-Zaev agreement to be signed at the Prespa Lakes, on the border between Greece and Macedonia.

Greece has long objected to its northern neighbor being called Macedonia because it has its own northern province of the same name, which in ancient times was the cradle of Alexander the Great's empire -- a source of intense pride to modern-day Greeks.

"I have an obligation to the Greek people to try to prevent the future of our homeland being mortgaged under a deal harmful to national interests," Mitsotakis said.

Although Tsipras' nationalist coalition partner the Independent Greeks party is strongly opposed to the Macedonia deal, they have stressed they do not intend to abandon him.

"I do not feel this government has lost the confidence of parliament," Tsipras told state TV ERT on Wednesday.

Of the agreement, he said it "benefits (Greece) and the region...with this agreement, we cancel out any attempt to usurp our history."

Macedonian Prime Minister Zoran Zaev has also hailed the deal, which was announced on Tuesday, calling it a "historic solution".

It still needs to be approved by Macedonia's parliament and pass a referendum there, as well as being ratified by the Greek parliament, a process that will take months.

Macedonia hopes that resolving the bitter dispute will help clear the way for it to join the European Union and NATO.

European Council president Donald Tusk and NATO chief Jens Stoltenberg issued a joint statement on Wednesday voicing the hope that "this unique opportunity to relaunch the wider Western Balkan region's European and Euro-Atlantic integration will not be wasted".

A 20-article document is to be signed by the foreign ministers of Greece and Macedonia states that Macedonia's constitution must be revised within the year for the deal to go ahead.

Opponents to the compromise have called for a protest on central Syntagma Square in Athens on Friday and Saturday.

Much of the criticism in Greece has focused on the government's acceptance that the neighboring country's language and ethnicity will be called "Macedonian".

The acceptance of the Macedonian language and nationality is an unacceptable national retreat," said Mitsotakis.

"There is no chance that those speaking a 'Macedonian' language will be called 'North Macedonians'," he said.

In Macedonia, the nationalist VMRO-DPMNE party has also rejected the deal and President Gjorge Ivanov said he would refuse to sign the text.

Ivanov can veto the Macedonian parliament's decision only once, and has no power to veto a referendum.

Skopje hopes to secure a date to begin accession talks at an EU summit in late June and an invitation to join NATO in mid-July.