Pro-EU lawmaker issues warning to PM May: 'We could collapse government' 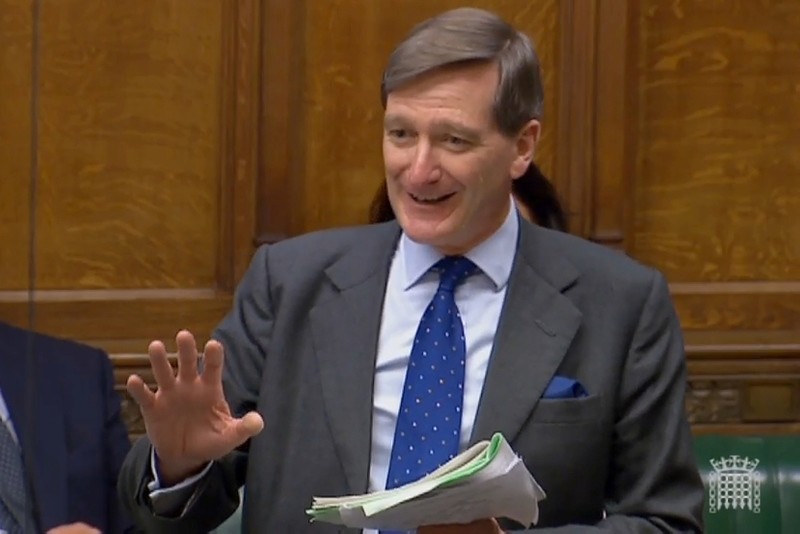 A video grab from footage broadcast by the Parliamentary Recording Unit (PRU) shows former attorney general Dominic Grieve in the House of Commons in London on June 12, 2018. (AFP Photo)
by Jun 17, 2018 12:00 am

A leading pro-European Union lawmaker in Britain's ruling Conservative Party warned on Sunday that a row over parliament's influence on the Brexit process could collapse the government, but said he hoped to find a way to avoid that.

Prime Minister Theresa May's minority Conservative government is fighting with rebels from her own party over the final wording of the laws that will end Britain's EU membership - a bitter row which threatens to undermine her authority.

"We could collapse the government, and I can assure you I wake up at 2 a.m. in a cold sweat thinking about the problems we have put on our shoulders," Dominic Grieve, the lawmaker negotiating with the government, told the BBC.

The minister leading those negotiations, Solicitor General Robert Buckland, said the government was standing by its own proposal, rejected by party rebels last week.

The row centers on what happens if parliament rejects the initial exit deal May and her team negotiate with Brussels.

Grieve and a cohort of potential Conservative rebels with enough votes to defeat the government want parliament to have more influence over the next steps than ministers are prepared to give them.

Negotiations on a compromise, promised last week by May to avert a defeat, fell apart at the last minute on Thursday when rebels said the government had changed the wording of an agreement.

"The first thing I want to understand is why this has been rejected?" Grieve said. "I'd urge (Brexit minister) David Davis ... (to) go away and look at it and talk to the government's lawyers, and he will be reassured that it doesn't do what he fears."

Davis and Prime Minister Theresa May have argued that they cannot accept anything which gives parliament the power to bind their hands in negotiations with the EU, or opens the door to lawmakers overturning the result of the 2016 Brexit referendum.

The rebels' proposal will come up against the government proposal in parliament's unelected upper chamber on Monday, and will then be discussed again in the elected lower house on Wednesday.

Wednesday's debate will be a crucial test of May's ability to either face down the rebellion, or negotiate a way out of trouble at short notice.

For now, Buckland said ministers were happy to stick to their position and see where the debate on Monday took them.

"Our position is to support the amendment as tabled (proposed) by the government," he said. "Of course we have Tuesday to consider matters ahead of the Wednesday vote."

"We've won every vote last week. I believe we can carry on in that successful vein."