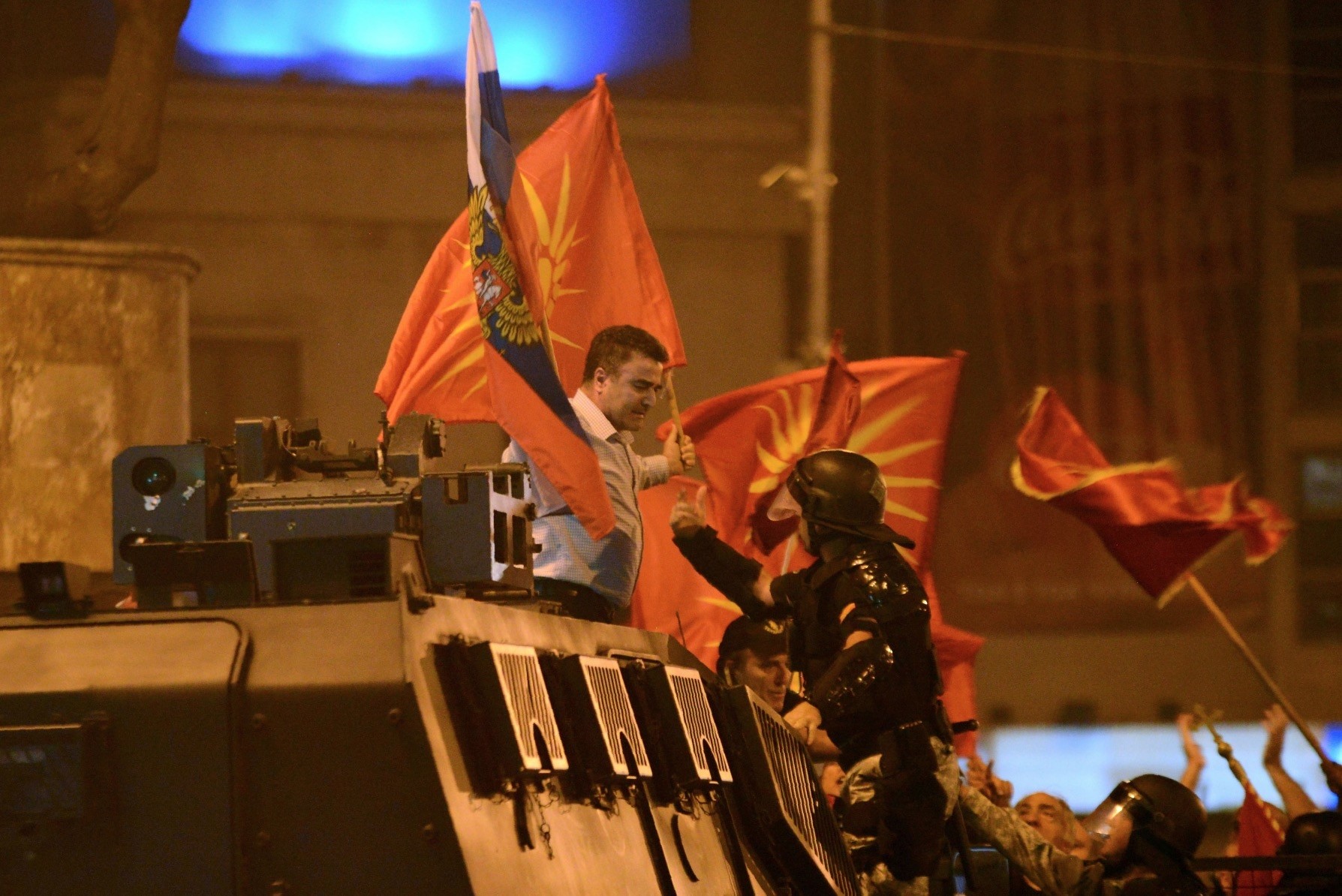 A police officer tries to grab a protester waving former Macedonian and Russian flags atop an armored police vehicle during protests in front of Parliament, Skopje, June 17.
by Compiled from Wire Services Jun 19, 2018 12:00 am

Macedonian authorities said seven policemen have been injured and 25 protesters detained during overnight clashes in the capital of Skopje, as demonstrators opposed to the name deal with Greece tried to push their way into parliament.

The interior ministry said police used tear gas to stop the demonstrators, who were throwing stones and firecrackers. The statement made no mention of injuries among the protesters. A few thousand people took part in the demonstration.

The clashes came after foreign ministers of Greece and Macedonia signed a preliminary deal that would see Macedonia being renamed "North Macedonia," during a meeting on Sunday on the two countries' border. Some 4,000 Greeks also opposed to the deal protested but were prevented from getting near the officials.

Clashes erupted with Greek police in which 12 people were injured.

In addition, a far-right Greek lawmaker was arrested for demanding a coup following a historic deal between the two countries, local media reported yesterday, according to Anadolu Agency (AA).

Konstantinos Barbarousis, a deputy of Golden Dawn, was arrested at his friend's house near Athens, where he was hiding from the police, after a fiery speech in the Greek parliament on Friday.

Barbarousis described the Greece-Macedonia deal as "treason" and called for the arrest of Prime Minister Alexis Tsipras, Defense Minister Panos Kammenos and President Projopis Pavlopoulos in his speech.

Later, Barbarousis was expelled from his party. The public prosecutor's office in Athens launched an investigation over allegations of treason against him.

Amid protests, Macedonia's government yesterday set in motion the process of ratifying an initial agreement with southern neighbor Greece. Macedonian government spokesman Mile Bosnjakovski said a cabinet meeting approved the agreement and formally forwarded it to parliament for ratification. It was not immediately clear when lawmakers would start the debate.

On Sunday, Greece and its northern neighbor signed a historic accord on renaming Macedonia, which ended a long-standing dispute between the two countries. The signing ceremony was recognized internationally as a significant event. Among those attending were U.N. Under-Secretary for Political Affairs Rosemary di Carlo, EU Foreign Affairs Chief Federica Mogherini and EU Enlargement Commissioner Johannes Hahn.

The United Nations' mediator for the name dispute, Matthew Nimetz, also was on hand. Nimetz spent the last 24 years trying to mediate between Greece and Macedonia, first as an envoy of U.S. President Bill Clinton and then representing successive U.N. secretaries-generals.

Under the agreement, Greece's northern neighbor will be renamed North Macedonia to address longstanding appropriation concerns in Greece, which has a Macedonia province that was the birthplace of Alexander the Great.

Greece in return will suspend the objections that prevented Macedonia from joining NATO and the European Union.

Greece, which is both a NATO and EU member, has long opposed the official name of its neighboring country, arguing it has a region by the same name in the north of its country.

Macedonia was admitted to the United Nations in 1993 under the provisional name of the "Former Yugoslav Republic of Macedonia," but more than 120 countries including Russia and the United States have recognized the Balkan country under the name of the "Republic of Macedonia." Skopje hopes to secure a date to begin European Union accession talks at an EU summit in late June and an invitation to join NATO in mid-July.