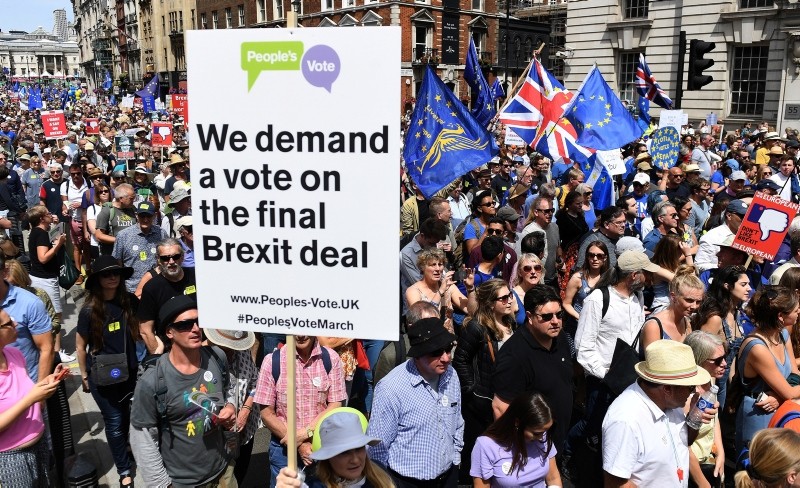 Tens of thousands of people took to the streets of London on Saturday to protest against Britain's exit from the European Union, exactly two years after the country delivered a shock result in its Brexit referendum.

The rally was organized by the anti-Brexit campaign People's Vote, which is pushing for a public vote on any final divorce deal agreed with the EU.

The campaign claimed on its Twitter page that over 100,000 people took part in the march, which snaked through central London and made its way to the parliament at Westminster.

The event was attended by pro-EU politicians from across Britain's political spectrum, including the main opposition Labour Party, the Liberal Democrats and some rebel members of Prime Minister Theresa May's Conservative Party.

"It is simply dishonest for [members of parliament] to say that they still believe the will of the people is the same as it was two years ago," anti-Brexit campaigner Gina Miller said in a speech to the crowds.

"Together we must stand up, demand our voices are heard, demand a people's vote," she said.

Protesters held banners reading "Brexit will make us all poorer" and "No goodbye based on lies," while many could be seen waving the blue-and-yellow flag of the European Union.

Since then, the negotiations for leaving the bloc have been fraught with controversy and disagreement.

According to the current Brexit timeline, Britain is set to leave the EU at the end of March next year.

The government is pursuing a so-called 'hard Brexit,' which would see Britain leave the customs union and single market, which guarantees the free movement of goods within the bloc - but this approach has been criticized by many as ill-thought-out and damaging for business.

"Whatever your opinion on Brexit, no one would disagree that it's a big deal. And not a done deal," the People's Vote campaign said ahead of the march in central London.

The group urged supporters to "ensure that we, the people who will be affected by the government's Brexit negotiations for generations, have a People's Vote on the final Brexit deal."

But hardline Brexit campaigner, Foreign Secretary Boris Johnson, hit out at the Remain camp in an op-ed for The Sun tabloid, saying the British people "don't want a half-hearted Brexit."

Using his trademark colorful language with a reference to toilet paper, he went on to warn against "some bog roll Brexit - soft, yielding and seemingly infinitely long."

The People's Vote group has published no detailed plans on how it would organize another vote, what the questions would be or how the results of the two votes would be reconciled.

The second anniversary of Britain's landmark referendum was also marked elsewhere in Europe, with the organizers of one pro-EU march in Berlin claiming to have attracted 1,000 participants.