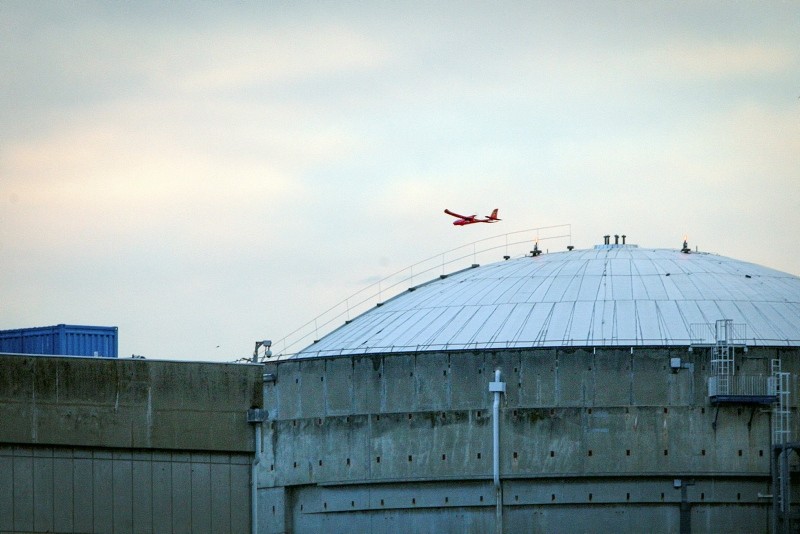 In this photo released by Greenpeace, a radio-controlled plane flies over the nuclear power plant of Le Bugey, central, France, Tuesday, July 3, 2018. (AP Photo)
by Compiled from Wire Services
Jul 03, 2018 12:00 am

Greenpeace activists said Tuesday they had crashed two remote-controlled aircraft — a drone and a tiny radio-controlled plane — into a French nuclear plant to highlight the lack of security around the facility.

The drone, which was decorated like a miniature Superman, slammed into the tower in Bugey, 30 kilometers (20 miles) from the eastern city of Lyon, according to a Greenpeace video Tuesday.

Greenpeace said the drone struck a storage pool for spent nuclear fuel next to a reactor, one of the most radioactive areas at the site.

"This is a highly symbolic action: it shows that spent fuel pools are very accessible, this time from the air, and therefore extremely vulnerable to attack," Yannick Rousselet, head of Greenpeace France's anti-nuclear campaign, in a statement.

A short time later, the group released a video showing a small remote-controlled plane heading to a crash at the same wall.

The environmental group said the aircraft were harmless but showed the lax nuclear security in France, which uses atomic power for about 75 percent of its energy needs.

French electricity group EDF played down any security risk, saying police forces had intercepted one of two drones launched by Greenpeace at dawn on Tuesday.

"The fuel building is key for security, designed in particular to withstand natural or accidental damage, which ensures its high degree of robustness," the company said, adding that it would lodge a complaint with police.

Last week 19 Greenpeace activists were handed suspended sentences for breaking into another nuclear plant in November 2017.

After Greenpeace activists broke into another nuclear plant last November, the French government opened a parliamentary inquiry into nuclear safety and security.

The findings of the report, which include an analysis of potential risks of drones equipped with explosives, are expected to be released soon.

In 2014 and 2015, drone flights were reported over several French nuclear plants, including Bugey, though Greenpeace denied any involvement