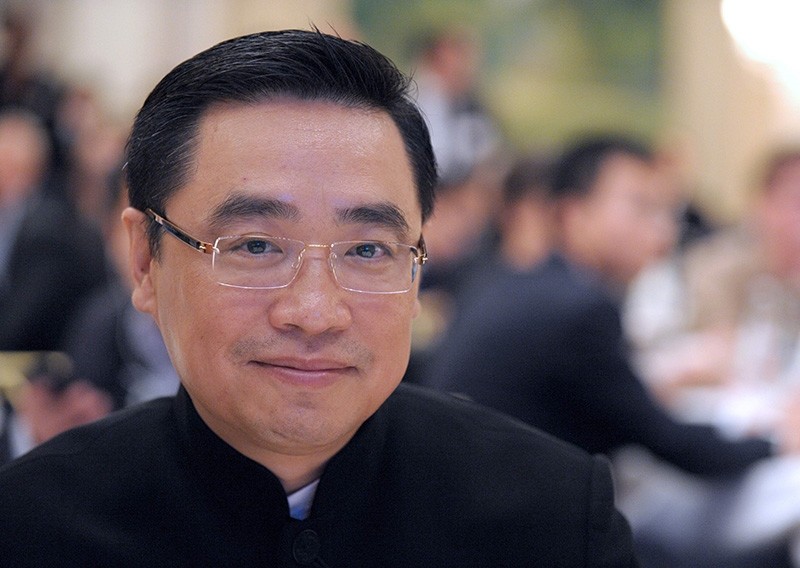 This file picture taken on October 23, 2012 shows then Chinese group HNA vice chairman and CEO Wang Jian posing before the signing of an agreement between Aigle Azur and HNA Aviation in Paris. (AFP Photo)
by Compiled from Wire Services
Jul 04, 2018 12:00 am

The co-chairman of HNA Group, a conglomerate that operates China's fourth-largest airline and finance, logistics and other businesses around the world, died in an accident while on a business trip in France, the company said Wednesday.

Wang Jian, a co-founder of the company, suffered "severe injuries" in a fall in Provence in southern France and died Tuesday at age 57, said an HNA Group statement. It gave no other details.

Wang fell into a 10-meter (32-foot) void while taking photos on a high wall in Bonnieux, a town in a region famed for its panoramic views.

"Together, we mourn the loss of an exceptionally gifted leader and role model, whose vision and values will continue to be a beacon for all who had the good fortune to know him," his firm said in a statement issued in China.

HNA said Wang, whose personal fortune is estimated at $1.7 billion by Forbes magazine, had been visiting Bonnieux during a business trip to France.

The company started as a small provincial airline servicing China's Hainan Province but has expanded quickly in recent years under the leadership of Wang and business partner Chen Feng.

The firm's $230 billion in assets were built up during a foreign buying spree that saw it diversify into tourism and finance via major deals to buy shares in companies including the Hilton hotels group and Deutsche Bank.

It also took stakes in foreign airlines such as Virgin Australia, France's Aigle Azur and TAP in Portugal.

But HNA came under pressure last year as Beijing cracked down on the risky debt-fueled financing that enabled its expansion.

The conglomerate has started selling parts of its empire to pay down its loans, including its Hilton and Deutsche Bank shares, and Wang's death was seen as likely to complicate the unwinding process.

"It will also put HNA Group and related companies' restructuring plans back on the drawing board, in our view," Png added.

Warut Promboon, managing partner at credit research firm Bondcritic, told the news agency that Wang's death would be a blow because the company "relies on personal connections, especially with Chinese banks and Chinese government officials."

Wang owned about 15 percent of the Chinese group, making him one of the group's biggest shareholders, Bloomberg reported.

Wang began his career in civil aviation planning in 1983.

Bonnieux is a medieval village in the Provence area of the south of France, a favored destination for the rich and famous over the peak summer holiday period.