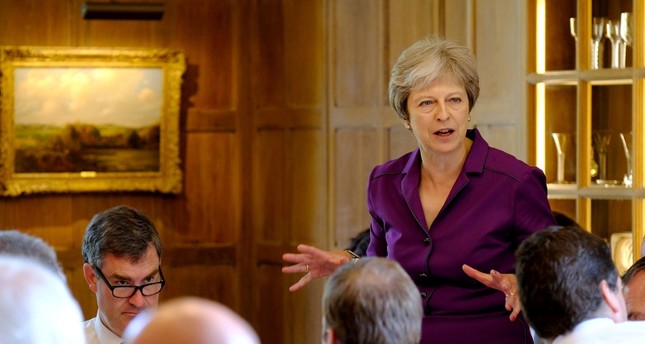 British Prime Minister Theresa May won agreement Friday from her warring cabinet to pursue "a UK-EU free trade area" after Brexit, as she bids to unblock negotiations with the bloc amid warnings time is running out to get a deal.

The proposal would create "a common rule book for industrial goods and agricultural products", May said in a statement following a day of talks at Chequers, the 16th-century manor house near London that serves as her official country retreat.

She added ministers also settled on "a new business-friendly customs model", which would maintain high standards but allow Britain "to strike new trade deals around the world" once it has left the European Union next March.

The government believes that plan would allow Britain to maintain frictionless trade with the EU in goods, avoid customs checks on the sensitive Irish border, and end both free movement of people and jurisdiction of the European Court of Justice (ECJ) in Britain.

The positions were agreed at the much-anticipated cabinet meeting as rumors swirled that ministers such as Foreign Secretary Boris Johnson could oppose elements of the stance and resign.

"Today in detailed discussions the cabinet has agreed our collective position for the future of our negotiations with the EU," the prime minister said.

"Next week we will be publishing a white paper which will set out more details of how we will be taking back control of our money, laws and borders," she added.

"Now we must all move at pace to negotiate our proposal with the EU."

Less than nine months before Britain leaves the bloc, May's government is finally setting out exactly what it wants following public splits about how aligned it will remain with the EU.

The lack of progress has frustrated European leaders, who are stepping up preparations in case there is no agreement at all, and businesses which are being increasingly vocal about the risks to jobs and investment.

The cabinet agreed Friday that Britain's own preparations for a so-called "no deal" scenario with the EU should also be intensified, according to the government.

Agreeing a common position among her divided ministers is only one element of the Brexit process -- the hardest part will be getting agreement from Brussels, which has repeatedly warned Britain to lower its expectations.

The EU's chief negotiator Michel Barnier on Friday said: "I'm ready to adapt our offer should the UK's red lines change... Ideally the UK's proposals will facilitate both the UK's internal political debate and the negotiation with us."

Faced with the risk of an impasse, Austrian Chancellor Sebastian Kurz, whose country holds the EU's rotating presidency, has mentioned the possibility of extending talks and therefore delaying Britain's departure date.

But this would depend on a unanimous decision by EU leaders.

Businesses have upped the pressure for an agreement ahead of the meeting, with Airbus chief executive Tom Enders saying at a briefing on Friday that May's government had "no clue or at least no consensus" on avoiding serious harm from Brexit.

Under the cabinet's plan, Britain would be half-in, half-out of the European single market -- something the EU and Brexit hardliners in May's own Conservative party will struggle to accept.

The hoped-for free trade area and new customs arrangement "would avoid friction at the border... and ensure both sides meet their commitments to Northern Ireland and Ireland", according to a Downing Street summary.

The issue has proved a key sticking point in Brexit negotiations.

The newly-agreed plan would smooth trade in agricultural, food and fisheries products, and protect integrated supply chains and just-in-time processes.

The British cabinet also agreed to strive for "a joint institutional framework" to interpret and apply any future relationship, No. 10 said.

"This would be done in the UK by UK courts, and in the EU by EU courts -- with due regard paid to EU case law in areas where the UK continued to apply a common rulebook," it said.

But Brexiteers in parliament have voiced strong opposition to any continued role for the European Court of Justice.

Meanwhile, the cabinet proposal would retain regulatory flexibility for its dominant services sector, "where the potential trading opportunities outside the EU are the largest", in return for restricted access to EU markets.

It accepts the end to current "passporting" rights allowing British financial firms to operate freely in the EU, but suggests arrangements "that preserve the mutual benefits of integrated markets and protect financial stability".

Although May appeared to avoid any ministerial resignations Friday, initial reaction to the plan did not bode well.

"This is a bad deal for the UK which will only slide further as the EU take more and more."

Share on Facebook Share on Twitter
Previous in Europe A leading figure in the U.S. white nationalist movement said Friday... Next in Europe Thousands of people marched through German cities on Saturday to protest...
DAILY SABAH RECOMMENDS