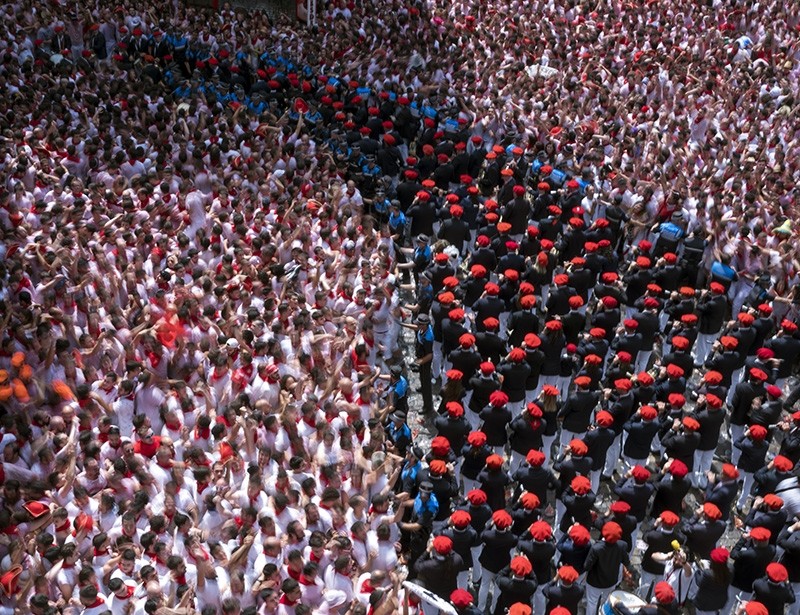 Revellers with hands up as fife and drum music begins (R) and a line of police hold back the revellers as the Festival of San Fermin begins in Pamplona, northern Spain, July 6, 2018. (EPA Photo)
by Daily Sabah with Agencies
Jul 06, 2018 12:00 am

Thousands of revelers filled Pamplona's main square on Friday to watch the traditional "chupinazo" firecracker being set off, marking the start of the northern Spanish city's annual San Fermin festival, despite outcry over sexual abuse and animal rights violations.

Participants drank and sprayed sangria ahead of the opening of the festival which draws hundreds of thousands of visitors from around the world for its daily bull runs in the city's narrow streets.

Wearing the traditional white T-shirts and trousers, the crowd cheered and chanted while waiting for the "chupinazo," which is in the shape of a rocket, to be fired into the sky at midday (1000 GMT). They then tied red handkerchiefs around their necks celebrating the start of the weeklong fiesta.

For eight consecutive mornings starting Saturday, daredevils will race with bulls along an 850-meter (930-yard) street course to the city's bullring, where the animals are killed during the traditional corridas.

This year's fiesta has been preceded by a controversial court ruling in April in which five men, who called themselves "The Wolf Pack," were cleared of raping an 18-year-old woman at the 2016 event and convicted of the lesser crime of sexual abuse.

The city has made calls to reassure women they will be safe from abuse during the festival, countering calls for a boycott of the event in protest of the failed rape prosecution.

Authorities have launched all kind of security measures and special protocols to prevent and deal with sexual abuse cases, which are increasingly being reported by women at festivals across Spain.

Stepped-up police surveillance and training, information booths and 24-hour hotlines are being reinforced this year with a new mobile app that allows the instant reporting of abuse, including victims' real-time locations.

Four Americans and three Spaniards survived last year after they were gored by the bulls, while dozens other suffered injuries and bruises, mostly due to falls during the race.

Rights activist having been protesting the runs for months, saying the events involving bulls are cruel and cause unnecessary harm to the animals for the sake of human entertainment.

But aficionados and bullfight promoters say the bull is a key part of the San Fermin tradition that needs to be preserved.

Bullfights are protected under Spain's constitution as part of the country's cultural heritage.