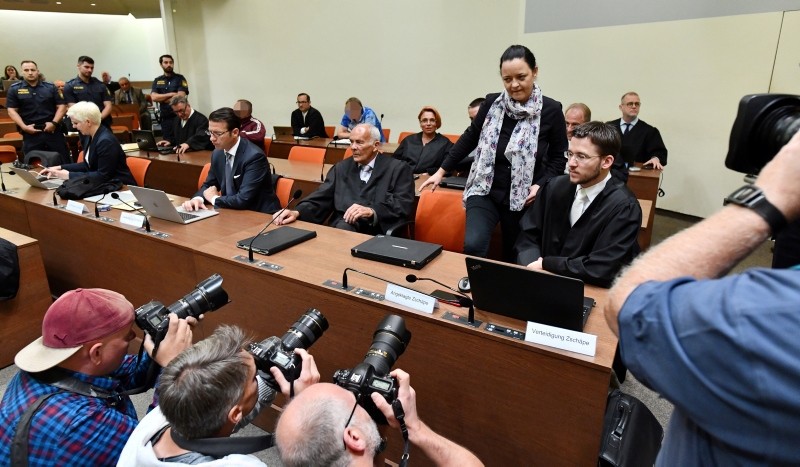 A German court is to hand down a verdict on Wednesday on the murder of eight Turkish immigrants, a Greek citizen and a German policewoman by a neo-Nazi terrorist group.

The shadowy group National Socialist Underground (NSU) went on a seven-year killing spree between 2000 and 2007, apparently without arousing the suspicions of the security agencies. The public first learned of the group's existence and its role in the murders in 2011.

The Higher Regional Court in Munich is widely expected to sentence chief suspect Beate Zschaepe to life imprisonment, for being a co-founder of the terrorist cell and for complicity in all the murders.

During the five-year-long trial, the NSU's last surviving member Zschaepe denied any role in the killings and tried to lay the blame on her friends Uwe Mundlos and Uwe Bohnhardt -- who were found dead in late 2011.

Zschaepe's defense team has so far failed to present any credible evidence disproving the accusations against her.

Rights groups and lawyers representing the victims are also expecting heavy sentences for the suspected accomplices.

The prosecutors demanded 12 years in prison for Ralf Wohlleben, accusing him of being the main supporter of the terrorist group. He was charged with providing the gun used in the murders.

Another key suspect Andre Emminger, who rented caravans for the group, which were used during the killing spree, would likely face a 12-year prison.

Two other suspects -- Holger G. and Carsten S. -- who assisted NSU members in the past, but later cooperated with the police and gave some insights about the far-right extremists, are expected to be given lighter sentences.

The neo-Nazi group NSU is believed to have been formed by three right-wing extremists -- Uwe Mundlos, Uwe Bohnhardt and Beate Zschaepe -- who were on the run and have lived under fake identities since 1998.

The group members are accused of killing eight Turkish immigrants and a Greek citizen between 2000 and 2006 with the same Czech Ceska 83 gun.

The killing of a German policewoman in 2007 was the last known murder of the far-right group.

The NSU members are also charged with carrying out two bombings in Cologne and 15 robberies in various German cities.

It remains unknown to date why the group has not claimed responsibility of the killings and bombings, until November 2011, when Mundlos and Bohnhardt were found dead after a murder-suicide following an unsuccessful bank robbery.

As the group's last surviving member Zschaepe denied any role in the NSU, and provided no new information about the murders, during the trial, major questions related to the murders remain unanswered.

Recent revelations have shown that German domestic intelligence agency BfV had dozens of informants who had contacts with the NSU suspects since the late 1990s.

But officials insisted that they had no prior knowledge of the NSU terror cell and its suspected role in the killings.

Until 2011, Germany's police and intelligence services excluded any racial motive for the murders and instead treated immigrant families as suspects in the case, questioning them over alleged connections with mafia groups and drug traffickers.

The scandal surrounding the NSU has exposed "institutional racism" problem in the country's police and security agencies, which were accused of stereotyping and discrimination against immigrants, and tolerating right-wing extremists.