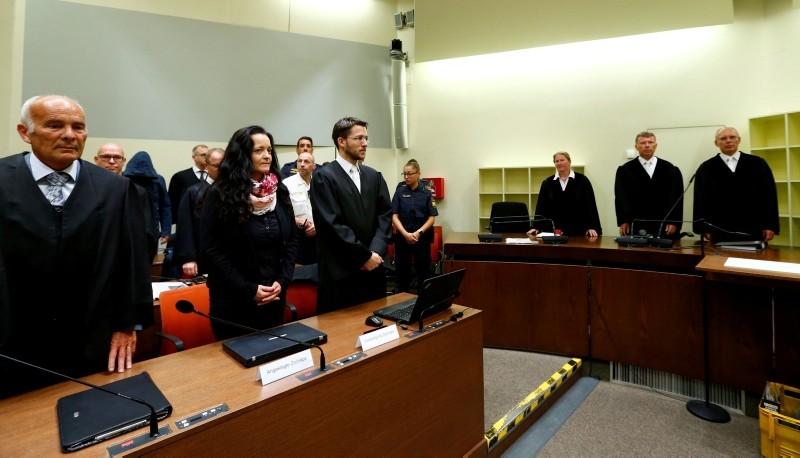 Beate Zschaepe (2L) and her lawyers Hermann Borchert (L) and Mathias Grasel wait in a Munich courtroom before her trial as the only surviving member of neo-Nazi cell NSU behind a string of racist murders, in Germany, on July 11, 2018. (AFP Photo)
by Daily Sabah with Agencies
Jul 11, 2018 12:00 am

At Munich's Higher Regional Court, Presiding Judge Manfred Goetzl said Zschaepe was guilty of membership in a terrorist group and complicity in 10 murders and two bomb attacks committed by the neo-Nazi group between 2000 and 2007 in a case that shocked Germany.

Goetzl ruled out any parole before she serves 15 years -- the average life term in Germany -- stressing the "exceptional severity of the crimes" she committed.

A parole court will decide after this period whether Zschaepe is eligible to apply for release.

The 43-year-old was arrested in 2011, shortly after her two accomplices were found dead in an apparent murder-suicide. Together with the men, Uwe Mundlos and Uwe Boehnhardt, she had formed the National Socialist Underground, which pursued an ideology of white racial supremacy by targeting migrants, mostly of Turkish origin.

Additionally, Ralf Wohlleben has been sentenced to 10 years in prison for supplying a weapon used by the killers in the series of murders.

A third suspect, identified as Holger G, received a three-year sentence for supporting a terrorist organization. A fourth, identified as Andre E, received two years and six months for the same charge.

The fifth and final suspect, Carsten S, who was underage at the time of the crimes, received a three-year youth detention sentence for aiding and abetting nine of the murders.

Authorities for years failed to attribute the killings and two bomb attacks to a far-right group, instead investigating nonexistent gangland ties of the victims.

NSU members killed eight Turks, a Greek and a German policewoman over seven years from 2000.

The long-awaited verdict drew a long queue outside the courthouse, with some even camping overnight to gain one of the 50 seats available to the general public in the courtroom.

The murders were initially brushed off as infighting between immigrant crime gangs. Investigators even suspected members of the victims' families of complicity in the crimes.

Germany's Turkish community and the Central Muslim Council both criticized failings in the legal process. They said concentrating on the NSU trio was insufficient and that the involvement of other neo-Nazis and undercover agents from the security authorities had been brushed under the carpet.

"Our trust in state institutions has been deeply shaken," Gökay Sofuoğlu, chairman of the Turkish Community in Germany, told dpa ahead of the verdicts in the long-running NSU trial on Wednesday.

This trust can only be rebuilt by "further trials of concretely named Nazis and agents in the NSU structure," Sofuoğlu said.

"This failure [to look beyond the NSU trio] is a great burden for the victims' family members and social peace in Germany," the Central Muslim Council said in a statement.

The council called for the German government to create the post of anti-racism commissioner, a person who would report annually to parliament about racist crimes and raise the awareness of the police, authorities and public prosecutor about racism in Germany.

There were several protests - in Munich, Cologne, Berlin and Rostock - scheduled for Wednesday, organized by others who feel the trial did not go far enough, including a march in Munich under the motto "It doesn't end here!"

Turkish Foreign Ministry said in a statement that the trial – over what was defined as the biggest racially-motivated terror attack since World War II – was closely followed by Turkey and the Turkish community since it was launched five years ago, adding that the court's verdict has also been noted.

"However, unfortunately, today's decision could not reveal the background of the NSU murders and their connections with the deep state and intelligence in all dimensions, and the real culprits cannot be found. Therefore, we do not deem the verdict satisfying in the interest of justice and easing the public conscience," the statement said.

"The feelings and enduring pain of the victims' families, who were mistreated and subjected to many prejudices in the initial periods of the investigation, and the Turkish community in Germany are being shared by our nation," it added.

The statement recalled that the racist attacks targeting Turks in Hamburg in 1985, Mölln in 1992 and Solingen in 1993 are still as fresh in memory as the NSU murders.

"Bringing all perpetrators of the NSU murders and perpetrators of racist and xenophobic unresolved murders to justice, under Chancellor Merkel's promise in 2012, is important to strengthening the trust of the Turkish community in Germany for the state's security and judiciary institutions," it said, adding that the ministry will be following the issue closely in the future.

The ministry also urged German authorities to take all the precautions to prevent the likes of the NSU murders and continue the relentless fight on rising racism in Europe, emphasizing the role of politicians and media through avoiding populism.

Foreign Minister Mevlüt Çavuşoğlu said the verdict is "not enough," demanding investigations to find out if more people were involved.

"It is not enough that the chief suspect is punished. We have to find out and punish too whoever was behind these killings, inside the intelligence, inside the deep state, whichever institutions were part of it," Çavuşoğlu said in remarks carried by public broadcaster TRT.

"The trial being concluded with a punishment at this level is important. But this court case and investigations need to continue to find out the others who were responsible," Çavuşoğlu added, criticizing the court of "showing weakness by not revealing the guilty."