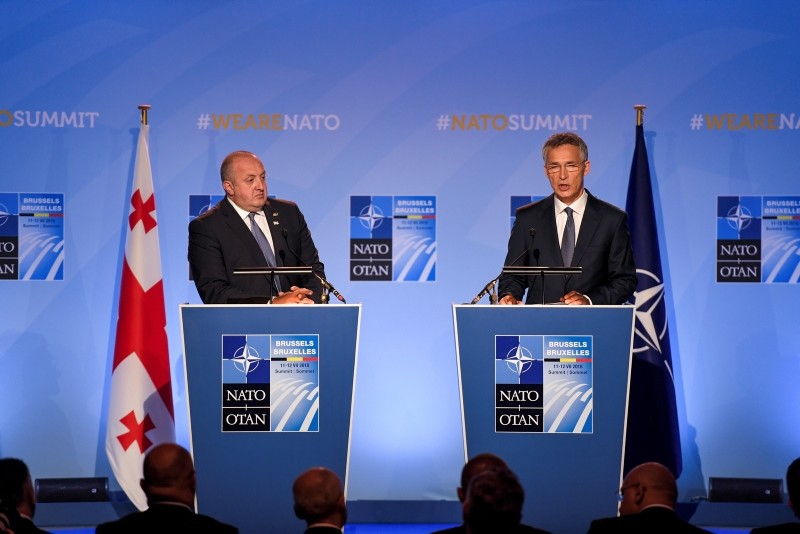 Speaking at a NATO summit, the alliance's chief on Thursday said that Georgia will join its ranks, despite separatist ambitions in parts of the former Soviet republic.

At a joint press conference in Brussels alongside Georgian President Giorgi Margverlashvili, Jens Stoltenberg said that the allied leaders reaffirmed the move on Wednesday.

Praising the progress Georgia is making on reforms, Stoltenberg said that NATO will continue to work with its government to prepare the country for membership.

"It is ten years since the first meeting of the NATO-Georgia Commission. In that time, our partnership has become increasingly close. NATO's relationship with Georgia is unique. Georgia is one of the Alliance's most important operational partners and a trusted friend," Stoltenberg said.

He said the 29-nation alliance supports the territorial integrity of Georgia, including its sovereignty over the breakaway regions of Abkhazia and South Ossetia.

Russia and Georgia fought a brief war in 2008, which led to the regions declaring independence. Russia has since been supporting them financially and militarily.

Despite Georgia's important contribution to NATO operations, including the Resolute Support mission in Afghanistan, the alliance is unlikely to invite the country in until the conflict with the two regions has been resolved.

"NATO is firm in our support for Ukraine's sovereignty and territorial integrity. And we strongly condemn Russia's illegal annexation of Crimea," he added.

Along with the UN General Assembly, the U.S., the EU, and Turkey also do not recognize Crimea as Russian territory.

Since the annexation, Ukraine has been wracked by conflict in its eastern regions with Russian-backed separatists, leading to more than 10,000 deaths, according to the UN.

A two-day NATO summit started on Wednesday with the attendance of 29 NATO heads of state and government to make important decisions on the future of the alliance.

The summit is discussing important decisions on the alliance's future and other major topics, including strengthening deterrence and defense, counter-terrorism and stability, strengthening cooperation with the EU, modernization, sharing responsibility and common values, and the transatlantic union.