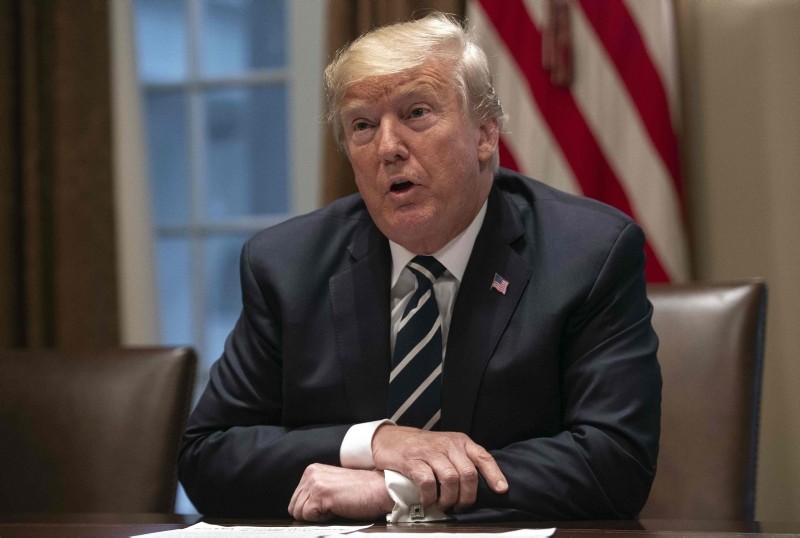 US President Donald Trump speaks about his meeting with Russian President Vladimir Putin ahead of a meeting with Republican lawmakers and cabinet members on tax cuts at the White House in Washington, DC, on July 17, 2018. (AFP Photo)
by Jul 18, 2018 12:00 am

The chief of staff to Iran's President Hassan Rouhani said Wednesday that his U.S. counterpart Donald Trump asked for a meeting eight times during the U.N. General Assembly last year.

"During Rouhani's last visit to New York for the U.N. General Assembly session, Trump asked the Iranian delegation eight times to have a meeting with the president," Mahmoud Vaezi told reporters on Wednesday, according to the conservative Mehr news agency.

He said the Iranian team had not responded to the requests, which came just after Trump announced he would no longer certify Iran's compliance with the 2015 nuclear deal -- setting the scene for his eventual withdrawal from the pact in May.

"We have a transparent policy and clear position with regard to our relations with the U.S... that (we) will not yield to pressure," Vaezi said.

Tehran said back in October that Trump had requested a sit-down with his Iranian counterpart during the U.N. meeting, but the claim of numerous requests had not previously been made.

Trump has said he is open to talks on a new deal with Iran that goes beyond its nuclear program to include its regional behavior and missile defenses.

Iran has said there is no chance of a renegotiation and is working with European and Asian partners to find ways around U.S. nuclear-related sanctions that will be reimposed in the coming months as part of Washington's withdrawal from the 2015 agreement.

A Trump-Rouhani meeting would have been the first between the presidents of the two countries since Iran's 1979 Islamic revolution.