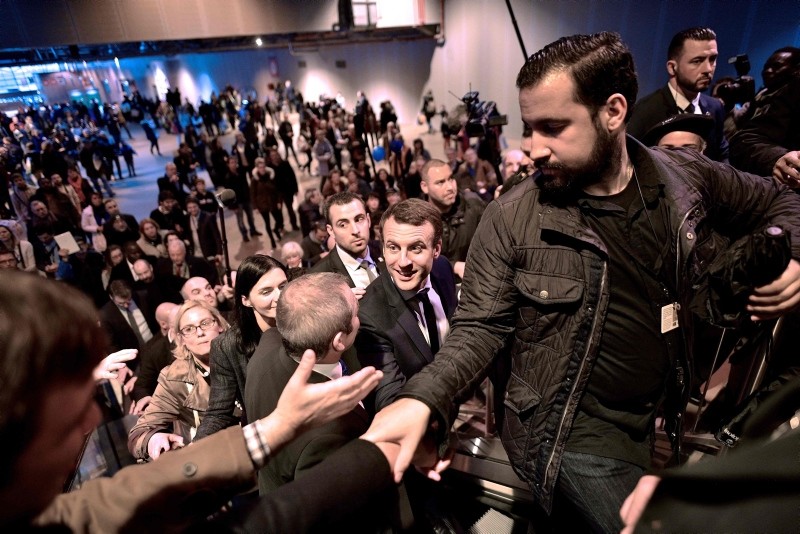 A top security aide to French President Emmanuel Macron has been seen in a video wearing a police helmet and beating up a student protester. His punishment — a two-week suspension — has brought criticism down on Macron.

Responding to public backlash, the president's spokesman said on Monday that the suspension without pay and change in responsibilities for Alexandre Benalla was the "most serious" ever given at the presidential palace.

In addition, a judicial official said a preliminary investigation has been opened for "violence by someone charged with a public service mission" among other things. The official wasn't authorized to speak publicly and demanded anonymity.

Le Monde newspaper published a video showing Benalla dragging off a woman then hitting and stamping on a young man while wearing a police visor during a demonstration in central Paris on May 1.

Benalla, who is not a policeman and previously worked as bodyguard, had been given permission to "observe police operations" during a day-off on the May 1 public holiday, Macron's office said.

Benalla was a popular and ever-present member of Macron's campaign team, usually found several steps behind the then-candidate, and transferred to the presidential staff in May 2017.

Opposition MPs immediately suggested there had been a cover up and questioned why the incident had not been referred to the police when it came to light in May.

Socialist Party leader Olivier Faure said there was a "a double standard" in how Benalla had been treated compared to any ordinary French citizen.

Alexis Corbiere, an MP for the hard-left France Unbowed party, said Benalla "deserves to be punished with a prison sentence, at least a suspended sentence and with very heavy sanctions."

Supporters of Macron claimed that the punishment handed down to Benalla -- suspension without pay for two weeks and a transfer to an administrative job -- was appropriate.

"Someone was found to have unacceptable behavior and there was a sanction," Social Cohesion Minister Julien Denormandie said on France Inter on Thursday, without naming Benalla. "It was immediate... meaning a suspension and a job change."

Richard Ferrand, a senior MP from Macron's party and top figure in the campaign team, said "it was not a close aide, it's someone who was responsible for security of the president during the election campaign and then joined the Elysee."

Benalla was suspended from May 4-19.