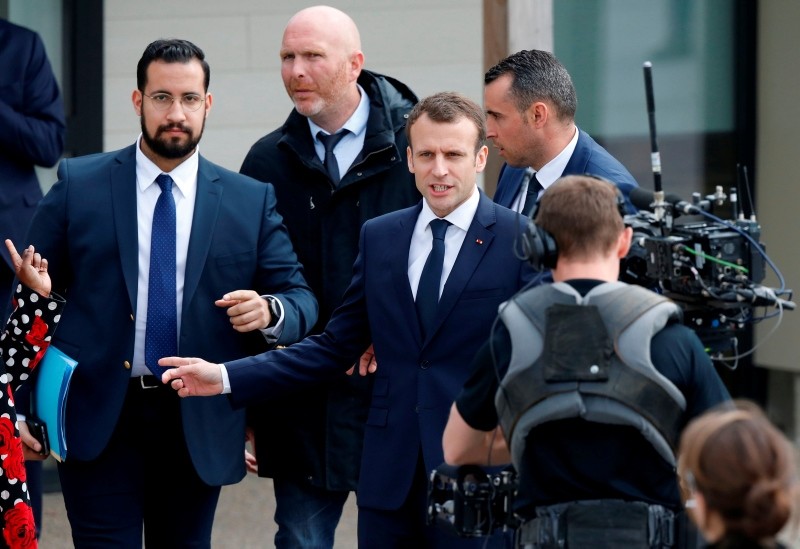 In this file photo taken on April 12, 2018 President Macron (C), next to Elysee Chief Security Officer Alexandre Benalla (L), arrives at a primary school in Berd'huis, northwestern France, for a television interview. (AFP Photo)
by Compiled from Wire Services
Jul 24, 2018 12:00 am

French President Emmanuel Macron responded on a growing political storm over a video showing his top bodyguard assaulting May Day protesters by saying he bore responsibility, lawmakers from his party said on Tuesday.

"I alone bear responsibility, they can come and get me. I answer to the French people," Macron, who has yet to speak on the crisis, was quoted as saying.

"I am the one who trusted Alexandre Benalla," he said, adding that Benalla had been a supporter during his campaign but that he felt "the acts on May 1st were like a disappointment or betrayal."

The scandal, dubbed "Benallagate", has prompted furious opposition claims of an attempted cover-up, which the government denies.

The lawmakers said on Twitter that the French leader had unexpectedly made the remarks at gathering of members of parliament from his party.

Macron is under fire in the biggest crisis of his tenure after footage emerged of the head of his security detail, Alexandre Benalla, hitting a male protester and dragging away a woman, while off duty and wearing a riot helmet and police tags.

He had so far refused to speak to the public on the worst scandal to hit his government since he was elected in May promising to restore integrity to French politics.

His silence appears to have dented his ratings, with 60 percent reporting an unfavorable opinion in an Ipsos poll published Tuesday -- a record low for the 40-year-old centrist.

An Elabe poll found 80 percent were "shocked" by the scandal, with 75 percent urging Macron to break his silence.