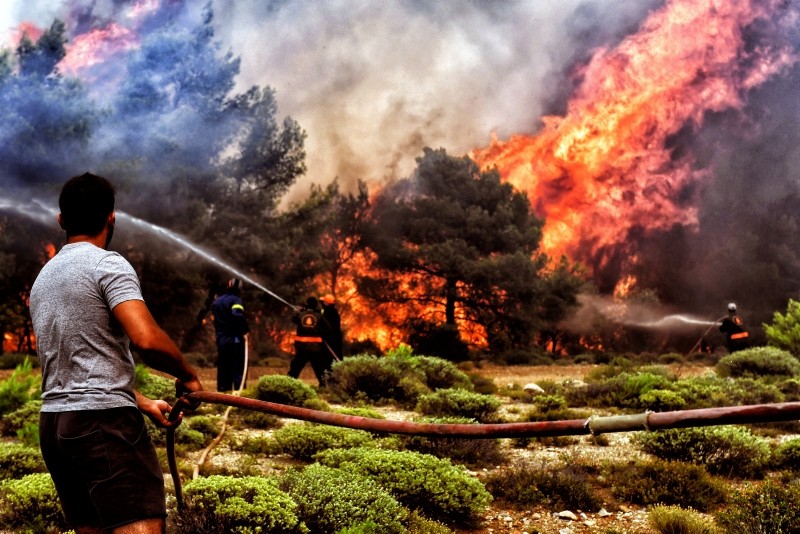 Greece's government said on Thursday there were "serious" indications the fire in which most of the 82 people who perished in the country's worst ever wildfires died may have been started deliberately.

"A serious piece of information has led to us opening an investigation" into possible "criminal acts" behind the starting of the fire on Monday that ravaged the coastal region of Mati east of Athens, Deputy Citizen Protection Minister Nikos Toskas said.

He said authorities were also examining whether another fire, which broke out hours earlier on Monday near Kineta to the west of the Greek capital, was "intentionally" lit. No one died in the Kineta fire.

"There are testimonies but I cannot say anything more now," Toskas added at a news conference in Athens, which was attended by government spokesman Dimitris Tzanakopoulos and fire and police chiefs.

Toskas also stressed that "climate conditions were extreme due to climate change".

Officials citing information from satellite maps have said that 13 fires broke out at the same time across the region of Attica -- which includes Athens -- on Monday.

As family members helped to identified the bodies of the dead on Thursday, anger has mounted over how authorities could have let the disaster happen.

Government spokesman Tzanakopoulos sought to address the criticism, saying that "the evacuation of Mati was not possible because the phenomenon only lasted an hour and a half".

He added that the winds, which reached 120 kilometres (75 miles) an hour, were "the strongest recorded in the last eight years".

The government has also announced a raft of measures to compensate those affected by the fires.

An 82nd person was pronounced dead Thursday by a fire service spokeswoman, without specifying whether they were found by rescuers or died in hospital.

After waiting for rain to put out the fires, heavy downpours on Thursday afternoon caused flash floods that stranded dozens of motorists and damaged dozens of cars. But no-one was hurt in the flooding, authorities said.

The fires struck coastal villages popular with holidaymakers and burned with such ferocity that most people fled to the safety of the sea with just the clothes on their backs.

Survivors spoke of harrowing scenes including entire families burned alive in their homes.

"We were alone, there was nobody to help us. Everybody did what they thought they had to do to survive on their own," resident Evi Kavoura told AFP.

"I feel a pain in my heart, a very heavy load."

There was still no official word on the number of people missing after the catastrophe, but the death toll of 82 already makes this Europe's deadliest fire outbreak this century.

The fire service said firefighters were still searching for people reported missing by their relatives, while public ERT television said around 30 bodies had been formally identified.

A website set up by residents lists 27 people still unaccounted for, including nine-year-old twin girls.

'Greeks help each other'

The swiftly moving flames on Monday evening overtook some terrified residents and tourists in their homes and others as they tried to flee in cars or on foot. AFP photographers saw the burned bodies of people and dogs.

Some 187 people were hospitalized, with 71 still being treated as of Wednesday evening, including almost a dozen children, most of whom were in a "serious condition", the fire services said.

In addition to 10,000 euros to the immediate relatives of someone who died, the government said it would provide 5,000 euros per property affected.

It said that of the almost 2,500 homes surveyed by experts after the fire, almost half were now uninhabitable.

The widow of Greece's most renowned filmmaker Theo Angelopoulos said the late director's house and personal archives had been lost in the fire.

The disaster unleashed a wave of solidarity and many survivors were being looked after by voluntary organizations, who were providing them with accommodation, clothing and food.

Amid mountains of food and baby nappies in a gymnasium in Rafina, near Mati, one of the volunteers, Joanna Kefalidou, an English teacher on vacation, said: "We're Greeks and Greeks tend to come together in times of need and help each other as much as they can."

The government of Prime Minister Alexis Tsipras has announced a relief fund open to donations worth an initial 40 million ($47 million) euros to help affected areas.

But the measures did little to assuage anger over how such a disaster could happen just a few kilometers from Athens.

Defense Minister Panos Kammenos was heckled Thursday as he visited the scene of the fires.

"You left us to God's mercy, there's nothing left," shouted one resident.

But Kammenos went on the counter-attack, telling the BBC that illegal construction in the past was also to blame for the disaster.

The "majority" of houses on the coast had been built without the proper licenses, he said.

"After this tragedy I think it is the moment to understand that it's dangerous for them and for their families to not follow the rules and the laws," the minister said.

The wildfires come as record temperatures in northern Europe have also seen blazes cause widespread damage in recent days.