Thousands of homes, major Paris station left without power after fire at substation 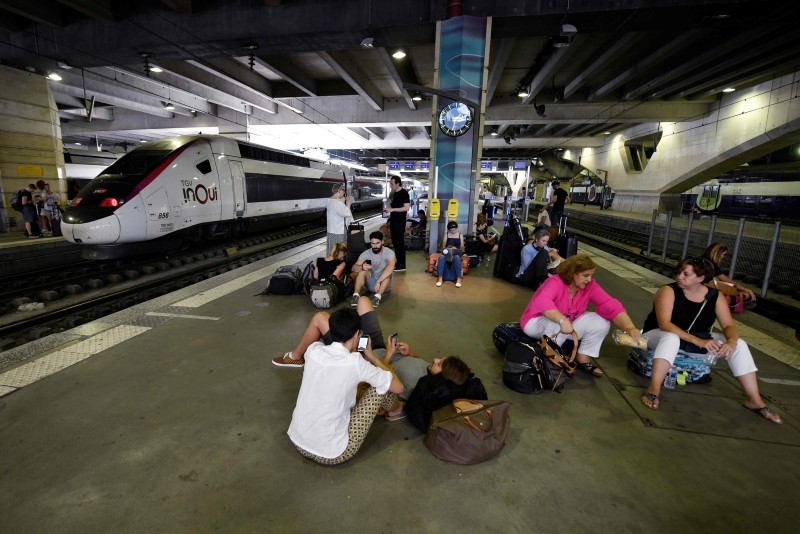 People wait on a platform of the Montparnasse railway station in Paris after several trains have been delayed following a fire of an electric transformer in the nearby city of Issy-les-Moulineaux, on July 27, 2018. (AFP Photo)
by Compiled from Wire Services Jul 27, 2018 12:00 am

A fire at a substation in the south west of Paris on Friday, knocked out electricity supply to thousands of homes in several neighborhoods, and one of France's busiest train stations, leaving passengers stranded ahead of a holiday weekend.

French electricity grid operator RTE, a unit of utility EDF, said in a statement that the fire started at a 63,000 volts underground tunnel at the station in Issy-les-Moulineaux, south west of the capital.

It led to outages in the immediate neighborhoods, two other suburbs and the Montparnasse train station, bringing train traffic to a standstill and leaving thousands of passengers who were about to leave for summer holidays stranded.

Montparnasse station is where trains to France's Atlantic Coast and Brittany depart.

French BFM TV said that some 16,000 homes were without power.

French Energy Minister Nicolas Hulot, said in a statement that an investigation was ongoing to determine the cause of the fire.

The disruption came ahead of one of the busiest weekends of the year for travel, with early holiday-makers returning home and others leaving for vacations in August.

The Interior Ministry said 50,000 police and gendarmes would be mobilized for the next two weekends, with 30,000 of them deployed on the roads.

With temperatures in the mid to high 30s across much of the country, the ministry advised drivers to bring water with them and not to throw cigarette butts out of their cars for risk of causing fires.

Travelers crossing between France and Britain were also suffering disruption Friday, as the heatwave prompted delays in the Channel Tunnel.

Montparnasse station was the scene of similar transport chaos almost exactly a year ago, when a giant signaling failure caused three days of heavy disruption.