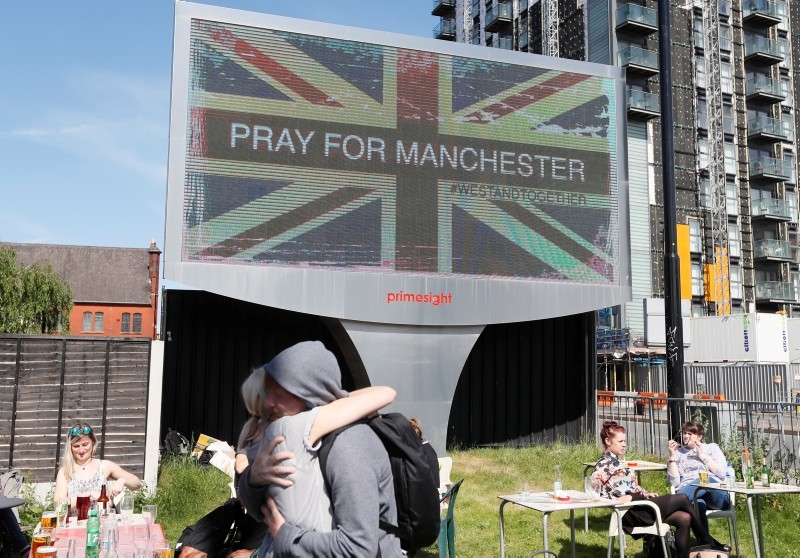 In this Tuesday May 23, 2017 file photo, couple embrace under a billboard in Manchester, England, the day after the suicide attack at an Ariana Grande concert that left more than 20 people dead. (AP Photo)
by Compiled from Wire Services Aug 01, 2018 12:00 am

The Royal Navy rescued the Manchester Arena suicide bomber and his younger brother from the civil war in Libya three years before he killed 22 people at the Ariana Grande pop concert.

Briton Salman Abedi was 19 years old in August 2014, when he was brought on board the British Royal Navy's HMS Enterprise in Tripoli, along with his brother Hashem.

More than 100 other British citizens were rescued along with them, and were taken first to Malta, from where they flew back to Britain.

Abedi had been monitored by British security services when he entered Libya, but his file had been closed just a month before his rescue, the Press Association reported.

Abedi, a 22-year-old born in Manchester to parents who had fled the Gaddafi regime in Libya, blew himself up as fans were leaving Grande's concert at Manchester Arena on May 22, 2017. 22 concertgoers were killed, and police say more than 800 people were left "with physical and deep psychological injuries."

Abedi's brother, Hashem, is in jail in Libya. The British government requests for his extradition to face trial over for suspected involvement in the Manchester attack, but all requests have been refused.

He was arrested in Libya shortly after the attack, and has been in prison there ever since.

Britain was the target of five terrorist attacks last year, which together killed a total of 36 people. Since March 2017, according to the British secret service, 12 attacks have been thwarted nationwide.