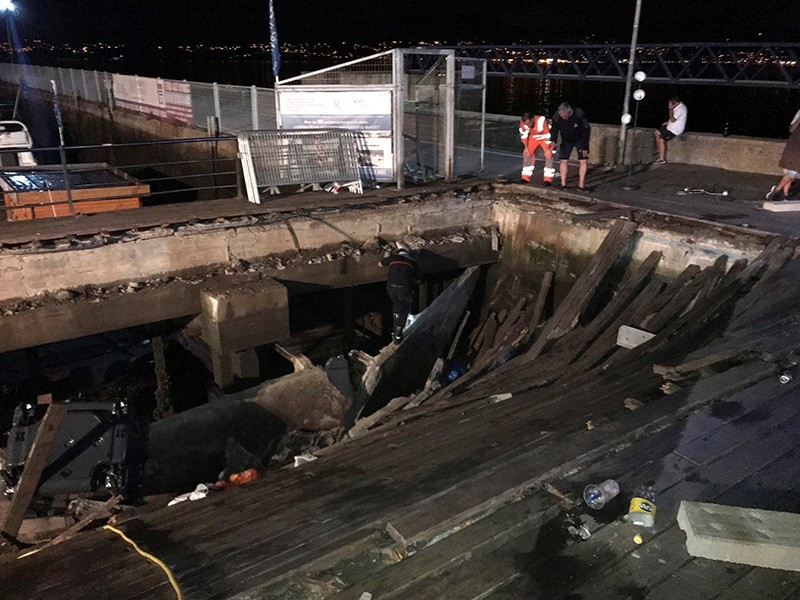 Several firefighters search for victims after several dozens people fell into the sea when a wooden gateway collapsed during a concert in Vigo, northwestern Spain, late at night on Aug. 12, 2018. (EPA Photo)
by Compiled from Wire Services Aug 13, 2018 12:00 am

An oceanside boardwalk collapsed during a nighttime concert in the Spanish city of Vigo, injuring 313 people, five of them seriously, authorities said Monday.

The wooden boards, packed with people watching a rap artist, cracked along a central section, about 40 meters (130 feet) long, and people slid down into the sea below, emergency services said. Eyewitnesses reported scenes of panic.

The five people who were seriously hurt did not have life-threatening injuries but had broken bones and some head injuries, the regional health minister in the northwestern region of Galicia, Jesus Vazquez Almuina, told local radio.

The president of the Vigo port authority, Enrique Cesar Lopez Veiga, said he suspects there was a structural problem in the boardwalk, which is supported by concrete pillars.

He told Cadena Ser radio that the boardwalk collapsed "probably because of excessive weight" on it.

The promenade collapse happened as Mallorcan rap artist Rels B was performing as part of the two-day O Marisquino festival in Vigo, a city of around 300,000 people.