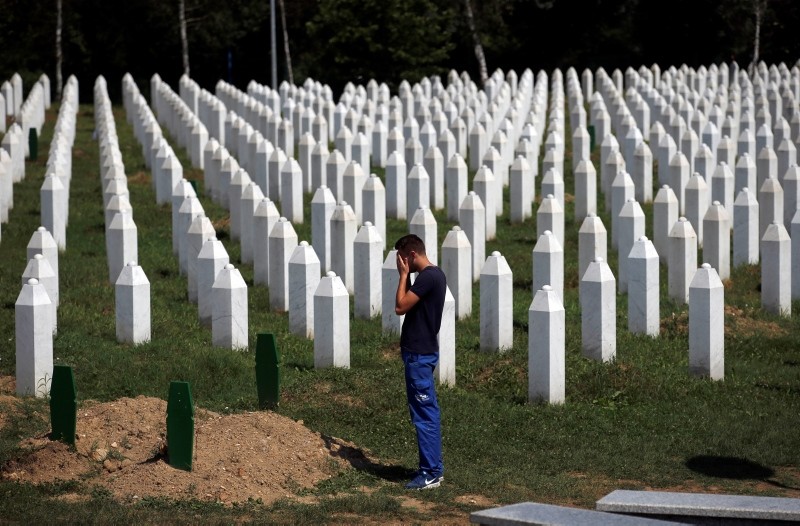 In a bid to fuel ethnic tensions ahead of the elections in October, Bosnian Serbs denied the government report on the 1995 Srebrenica massacre

Lawmakers in Bosnia's autonomous Serb-dominated region asked the regional government on Tuesday to revoke a 2004 report which concluded that Bosnian Serb forces killed about 8,000 Muslims in and around Srebrenica during the country's 1992-95 war.

The vote was initiated by Serb Republic nationalist President Milorad Dodik, and some analysts say it is the latest issue used by Serb ruling parties to mobilise voters around the nationalist agenda ahead of elections in October.

Dodik, an advocate of the Serb region's secession from Bosnia, has always rejected rulings by two war crimes courts, the International Criminal Tribunal for the Former Yugoslavia (ICTY) and The International Court of Justice, that the atrocity qualified as genocide.

Though acknowledging a crime occurred, Dodik says the numbers of those killed had been exaggerated in the 2004 report. Running to be a member of Bosnia's central tripartite presidency in Oct. 7 elections, Dodik also called for "an international commission" to make "the final report on Srebrenica."

"The report is irrelevant, extremely selective, incorrect and tendentious," Dodik told the parliament, saying it should have included Serb victims in Srebrenica.

The parliament concluded that a new independent international commission should be formed to determine the damages suffered by all peoples in the Srebrenica region.

The Bosniaks dismissed the motion. "No revision of this report can change the evidence proven in courts about this and other cases of grave war crimes," said Ramiz Salkic, the Bosniak vice-president of the Serb Republic.

Bosnia's Prime Minister Denis Zvizdic condemned Dodik's latest request as a "pre-election move" aimed at diverting public attention away from other issues. "No one, not a single institution in Bosnia could detract from the rulings of international courts," Zvizdic was quoted as saying by Bosnia's Fena news agency.

The EU delegation in Bosnia said in a statement: "The European Union rejects any denial, relativization or misinterpretation of the genocide in Srebrenica. We also condemn the use of inflammatory ethno-political rhetoric and actions."

A joint statement from three other bodies including the U.S. Embassy to Bosnia was also critical, saying they "strongly condemn the cynical utilization of the Srebrenica Commission's Report of 2004 for political purposes in the run-up to the elections."

Bosnia-Herzegovina, with a complex, government system, set up to end war in late 1995, heads to multi-layered elections on October 7.

Srebrenica was besieged by Serb forces who were trying to wrest territory from Bosnian Muslims and Croats to form their own state. The U.N. Security Council had declared Srebrenica a "safe area" in the spring of 1993. However, Serb troops led by General Ratko Mladic, who now faces genocide charges at The Hague, overran the U.N. zone.

The Dutch troops failed to act as Serb forces occupied the area, killing about 2,000 men and boys on July 11 alone. Some 15,000 Srebrenica people fled into the surrounding mountains but Serb troops hunted down and killed 6,000 of them in the forests. Hundreds of Bosniak families are still searching for missing people as a large number of victims were thrown into mass graves around the country during the Bosnian War. A total of 8,400 people remain missing since the war's end, according to the Institute for Missing Persons in Bosnia and Herzegovina.

The Srebrenica massacre is the only episode of Bosnia's 1992-1995 war to have been ruled as genocide by both the International Court of Justice (ICJ) and the U.N. war crimes tribunal.

The war claimed some 100,000 lives and left the Balkan country split into two semi-autonomous entities: the Serbs' Republika Srpska and the Muslim-Croat Federation. Each has its own government, president and parliament.

Dodik, in power as president and prime minister of RS for much of the past two decades, has frequently threatened to move the RS toward secession from Bosnia and has previously already brought the magnitude of the Srebrenica genocide into question.

He was sanctioned by the United States in 2017 for threatening the peace accord that ended the war by pushing to celebrate a controversial Serb-focused holiday.