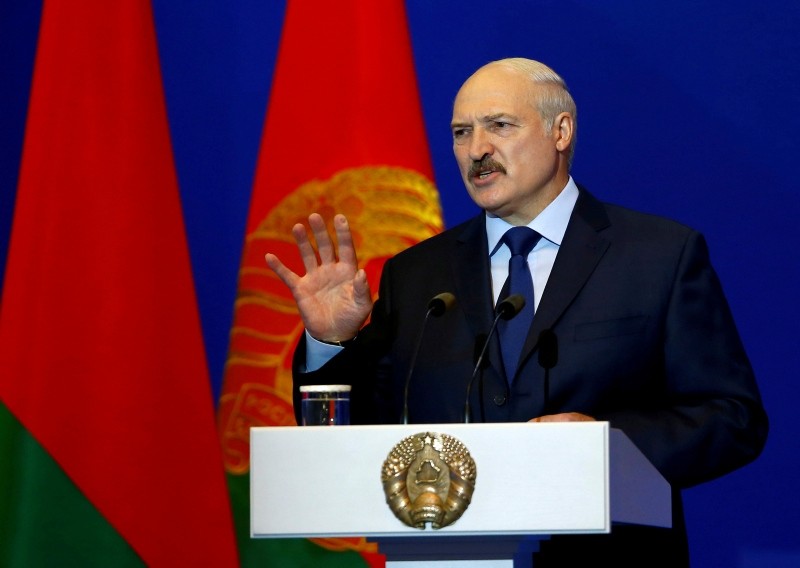 Belarussian President Alexander Lukashenko delivers a speech during the Minsk Dialogue Forum ,Eastern Europe: In Search of Security for All, in Minsk, Belarus May 24, 2018. (Reuters Photo)
by Aug 18, 2018 12:00 am

Belarus's strongman leader Alexander Lukashenko on Saturday sacked his prime minister and other key members of government in the biggest government reshuffle since 2014 following a corruption scandal that saw top officials arrested.

Several vice-premiers as well as the ministers for economy, communications and industry will also lose their posts.

"I won't name names, but in our government we had the following situation -- one program would be announced and then another program would be carried out," Lukashenko said in comments released by his press office.

"I've never allowed this and I never will! What we have promised the people -- with a government formed precisely with this program in mind -- we must follow this program," he added.

Over the summer a corruption scandal rocked the health service of the ex-Soviet nation.

Authorities arrested dozens of top health officials, medics and drug company representatives on suspicion of siphoning off millions of dollars in state funding.

Even the head of the security services in the country dubbed "Europe's last dictatorship" called for an overhaul of the system in the wake of the arrests.

Other smaller instances of corruption and administrative failures have hit local and national governments in recent months.

"It is good to replace these people, pillars of the old socialist economy," he told AFP, adding that the new team were not "bogged down in corruption".

"Sergei Rumas knows what the economy and finance are about, he's an intelligent economist...we can hope for the start of economic reforms, as long as Lukashenko gives a mandate to carry them out," Romanchuk said.

Political analyst Valeriy Karbalevich said: "Lukashenko has discovered the government wasn't afraid of him, it clearly wasn't carrying out his orders".

The president "hopes the new people will be too scared to steal or sabotage his directives," he added.

Lukashenko has ruled Belarus, wedged between Russia and Poland, since 1994. The 63-year-old leader has heeded some calls from the West to show more leniency towards political opposition, but opponents say their freedom to operate remains severely limited.