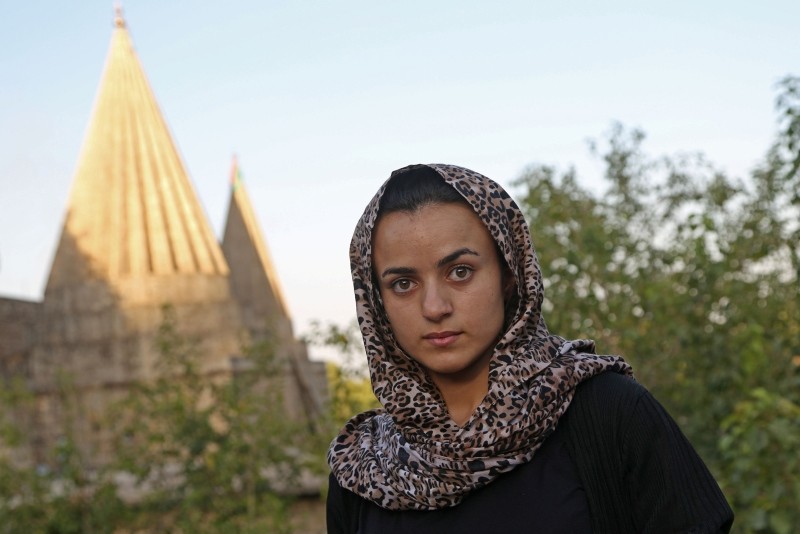 Yazidi woman Ashwaq Haji, allegedly used by Daesh as a sex slave, visits the Lalish temple in tribute to the terrorists' victims from her village of Kocho near Sinjar, in Lalish, northern Iraq, on August 15, 2018. (AFP Photo)
by Associated Press Aug 18, 2018 12:00 am

German prosecutors said Saturday they are taking seriously a Yazidi refugee's claim that she ran into her former Daesh captor twice in Germany, but say they need more information to identify him.

The case of 19-year-old Ashwaq Haji Hami made headlines this week after she was quoted telling the Iraqi-Kurdish news portal basnews that she returned to her homeland of Iraq for fear that her alleged tormentor could harm her in Germany. Several reports in foreign media suggested that German authorities were unwilling to act on the woman's claims.

"The young woman was interviewed but the information (she provided) wasn't precise enough," Frauke Koehler, a spokeswoman for federal prosecutors, told The Associated Press on Saturday. When authorities tried to follow up, the woman had already left Germany, Koehler said.

The AP, however, spoke to the woman at a camp for displaced people near Shekhan in the Kurdish region of Iraq.

Hami said she was captured by the Daesh terror group in August 2014, and enslaved and abused by a Daesh member called Abu Humam, whose real name she said was Mohammed Rashid. After managing to escape from Daesh, she says she allegedly encountered her tormentor in Germany in 2016 and again in February this year in the southwestern German town of Schwaebisch Gmuend.

"I recognized his face very clearly and whenever I see him I can recognize him ... because of the beatings he gave us," Hami told the AP. "We saw him 24 hours a day. So anytime or anywhere I see him, I would be able to identify him."

Hami said she reported the incidents to German police, but — citing fears for her safety — she moved back to Iraq in June.

"I am not ready to sacrifice my honor in Germany," she said. "If I was kidnapped or killed in Germany, who would find out who did that to me?"

"If we'd seen an opportunity to arrest someone, we would immediately have done so," she said, noting that German federal prosecutors opened a special investigation several years ago into alleged war crimes committed by Daesh militants with the aim of bringing perpetrators to justice. One of the investigation's elements is the killing of thousands of Yazidis by Daesh terrorists in 2014. Many more were taken into captivity, often kept as sex slaves.

About 3,000 Yazidis still remain missing, most thought to have been killed in the war that rolled back Daesb control in Syria and Iraq in the last three years.

Jan Ilhan Kizilhan, a German doctor who helped bring hundreds of Yazidi women to Germany in 2015, told public broadcaster ARD on Friday that seeing people who look like their tormentors can sometimes trigger traumatic memories.

Koehler said while the case was difficult, "if we get any further information to firm this up, we will pursue this."

To do so, Hami would need to return to Germany, which she is legally entitled to do, said Koehler.

"Our powers end at the German border," she said.