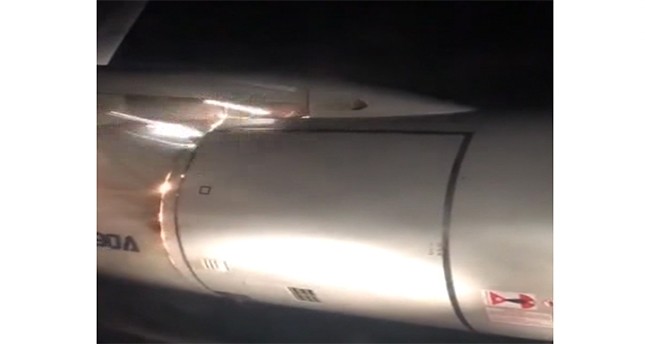 A Russian airliner carrying more than 200 passengers from Ufa to the southern resort city of Sochi was forced to make an emergency landing shortly after take-off because an engine was on fire, authorities said Wednesday.

The twin-engine Tu-204, operated by Red Wings Airlines, turned back to the central Russian city of Ufa and performed an emergency landing.

The plane was quickly evacuated after deploying inflatable slides with no one injured, according to a statement by aviation authorities.

A video of the incident posted on the social media showed flames leaping out of the burning engine as the plane flew through the night sky.

"The air traffic controller informed the crew that from the ground the left engine could be seen burning," the Federal Air Transport Agency said in the statement.

The aircraft's system to identify and automatically extinguish the fire failed to function, the statement said. An investigation is under way.

The plane had 215 passengers and seven crew members, the statement said.

On 2012, another Red Wings Tu-204 airplane flying without passengers broke into pieces after it slid off the runway and crashed onto a highway outside Moscow upon landing, killing four of the eight crew on board and leaving smoking chunks of fuselage on the icy road.