President Steinmeier says suspicion of migrants is shameful for Germany 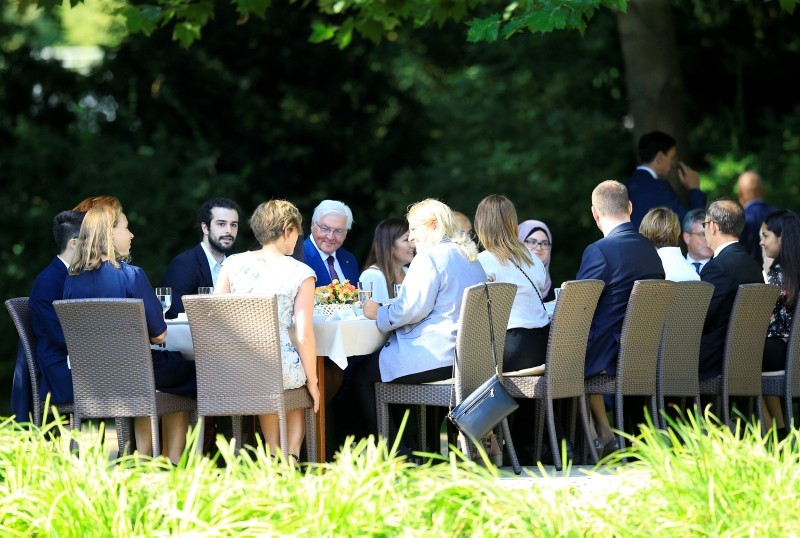 President Frank-Walter Steinmeier (L) talks with people, many of Turkish or immigrant origin, whom he invited from the local neighborhood for coffee and cake to his residence 'Schloss Bellevue' palace, in Berlin, Germany, Aug. 22, 2018. (EPA Photo)
by Anadolu Agency Aug 23, 2018 12:00 am

Germany's President Frank-Walter Steinmeier has called on all citizens to stand up against racism and discrimination.

"A permanent suspicion of migrants, no matter how long they've lived in Germany, isn't only hurtful for the individual. It's a cause of shame for our country," he said as he welcomed a group of his neighbours, mostly with Turkish heritage, at the presidential palace on Wednesday.

"Racism and discrimination violate human dignity and damage our democracy. They devalue what we in this country have already achieved together," he also stressed.

Steinmeier invited the small group of 13 to hear their views on migration, integration, discrimination and racism in everyday life at a coffee reception in the grounds of Schloss Bellevue in Berlin.

The meeting came a few weeks after German-Turkish footballer Mesut Özil sparked a debate in the country with his decision to quit Germany's national team, due to what he considered was discrimination and racist propaganda he faced recently after posing for a picture with Turkish President Recep Tayyip Erdoğan.

The president steered clear of all mention of the Özil affair on Wednesday. Nevertheless, the fact that the German-Turkish coffee reception was his first appointment after the summer break can be interpreted as a decisive signal.

Steinmeier expressed regret over many reports of racism and discrimination, after social media users started to tell their own personal experiences under the hashtag MeTwo.

"I can't forget these stories. They make me feel uneasy. We as a society must not be indifferent to them, and we most certainly shouldn't sweep them under the carpet," he said.

Steinmeier underlined that migrants have enriched the country and have the same rights and duties as other citizens.

"Without them, without their families who joined them later, without their children and grandchildren, our country's economic prosperity, indeed today's society, would be inconceivable," he said.

"We've achieved this together -- and as president of this country, I'd like to thank you for that!"

Some 19.3 million people out of 81.7 million in Germany are immigrants or their descendants, according to the federal statistics office.

People of Turkish origin Turks continue to be the largest group in Germany with an estimated population of 2.8 million, followed by 2.1 million Poles and 1.4 million Russians.

Germany has witnessed growing racism in recent years fueled by far-right parties, which have exploited fears over the refugee crisis and terrorism.