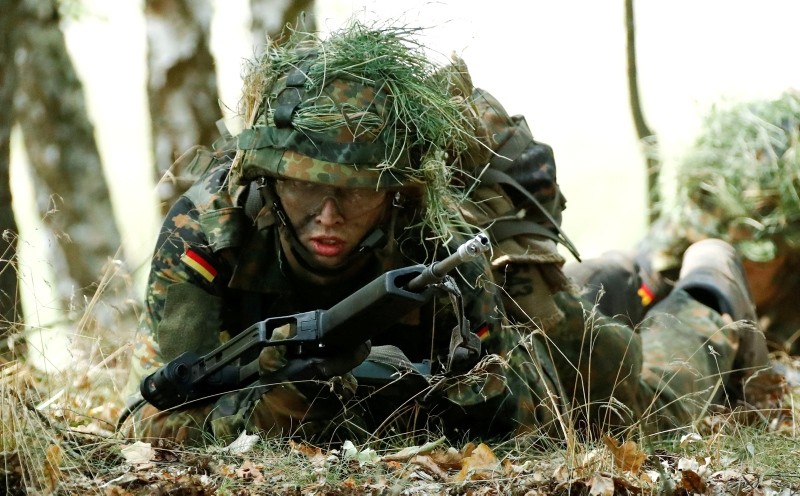 A German Bundeswehr armed forces recruit of the Mechanized Infantry Battalion 411 takes position during a drill at a military training area in Viereck, Germany, August 8, 2018. (Reuters Photo)
by Aug 24, 2018 12:00 am

So, a few months before he turned 18, he joined the German army, becoming one of more than 10,000 minors to sign up since mandatory military service ended in 2011.

"I wanted to experience something and to get to know my own limits, to see how far I can go," Marlon, who asked for his last name not be used, told Reuters at a base in Viereck, near the Polish border in northeastern Germany.

The German military, or Bundeswehr, has dramatically stepped up its recruitment efforts as part of a broader reset following Russia's annexation of Crimea from Ukraine in 2014.

Pressure on Berlin to beef up its military mounted again in July when U.S. President Donald Trump told a NATO summit that Washington could withdraw support for the alliance if Europe did not boost military spending.

To help attract new recruits, the military has targeted youngsters with slick online video campaigns, drawing criticism from some left-wing politicians and child welfare advocates in Germany, where the army remains a sensitive career choice more than 70 years after World War Two.

But the campaigns are paying off.

With lively music and scenes showing the lives of young soldiers, the Bundeswehr's shows on YouTube, which is owned by Alphabet, have attracted more than 64 million views.

In October, traffic at the Bundeswehr jobs website increased 60 percent during a six-week broadcast of "Mali", a YouTube series centerd on eight soldiers serving in the U.N.'s peacekeeping mission in the West African country.

The Bundeswehr Exclusive YouTube channel has over 330,000 followers and its latest production portrays the lives of a group of young paratroopers. The army is also active on other sites such as Facebook, Instagram and Snapchat.

According to a Trendence Institut survey of 20,000 school students across the country, the military is now considered Germany's third most attractive employer, behind sportswear maker Adidas and the police in first place.

"The Bundeswehr today is a volunteer army ... Therefore, it must approach young people to win them over," a spokeswoman for the personnel management department at the Bundeswehr said.

Before signing up, Marlon said he browsed the army's website and watched a series of YouTube videos.

He needed his mother's consent to join because he was under 18, but she was happy to give it and is now pleased her once-messy son has become more organized, Marlon said.

The Bundeswehr says the YouTube content aims to offer a realistic and authentic image of life in the military, but some politicians and children's rights advocates argue the glossy marketing gives minors a false impression.

"The entire advertising efforts of the Bundeswehr are more adventurous than a realistic description of the job," Tobias Pflueger, defense policy spokesman for the pacifist Left Party.

More than 30,000 people signed a letter delivered to German Defense Minister Ursula von der Leyen a year ago that urged the Bundeswehr to stop recruiting minors.

She said then that the army must have the same chance as other employers to attract people before they turn 18, adding that minors were trained in safe spaces and didn't handle weapons alone until they turned 18.

"This is embarrassing and sends a wrong signal to the world," said Ralf Willinger from rights group terre des hommes.

"It weakens the international 18-year standard, encouraging armed groups and armies from other countries to legitimate the use of minors as soldiers."

Recruits under 18 in Germany undergo military training like other adult trainees, but they have special provisions such as not being allowed to participate in guard duty or foreign missions, and weapons are only used for educational purposes.

Ilka Hoffmann, a board member at the GEW union that represents about 280,000 teachers, social workers and education workers, says the nature of military work meant there should be more caution about hiring under 18s.

"This is not a normal profession. In no other profession does one learn to kill, and is one confronted with the danger of dying in war. That is the one difference," Hoffmann said.