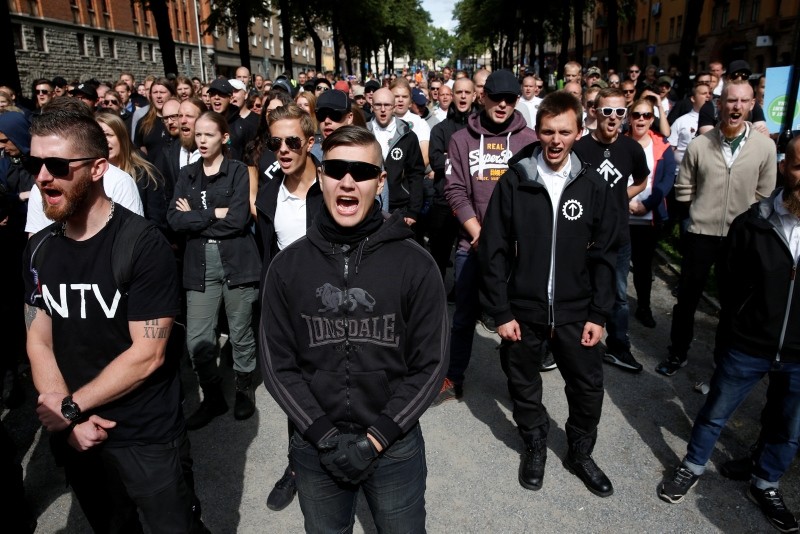 Supporters of the neo-Nazi Nordic Resistance Movement (NRM) hold their banners during a demonstration in Kungsholmstorg square in Stockholm, Sweden, 25 August 2018. (EPA Photo)
by Aug 25, 2018 12:00 am

Around 300 neo-Nazis demonstrated in central Stockholm on Saturday, drawing boos from protesters and politicians seeking to ban their movement.

Under the close watch of a detachment of police in riot gear, activists from the Nordic Resistance Movement (NRM) gathered in a square in the Swedish capital.

At the edges of the square, hundreds of counter-demonstrators gathered behind a security cordon, shouting slogans and banging the metal barriers in a bid to drown out the NRM speeches.

Among the protesters was Culture Minister Alice Bah Kuhnke, who was born to a Gambian father and a Swedish mother.

Both the rally and the counter-protests ended peacefully without incident, an AFP correspondent said.

Sweden, which boasts a long tradition of welcoming refugees and persecuted groups, is experiencing a creeping rise in neo-Nazi activities in public and on social media.

NRM, which was founded in 1997, is a political party which openly promotes a racist and anti-Semitic doctrine and has been described as the country's most violent Nazi organization by Swedish anti-racism magazine Expo.

Although the group counts a core membership of barely 80 members, it was more active than ever before in 2017, the magazine said earlier this year.

NRM says it wants to usher in a national socialist government.

For the first time in its 21-year history, the NRM will present a list of 24 candidates to run in September 9 elections, although the party is unlikely to pass the 4.0 percent threshold to enter parliament.

One of its candidates is facing a police investigation for raising a flag on April 20 in honor of Adolf Hitler's birthday.

"Democracy has always had the right to protect itself from the forces willing to resort to violence to destroy it," he said.