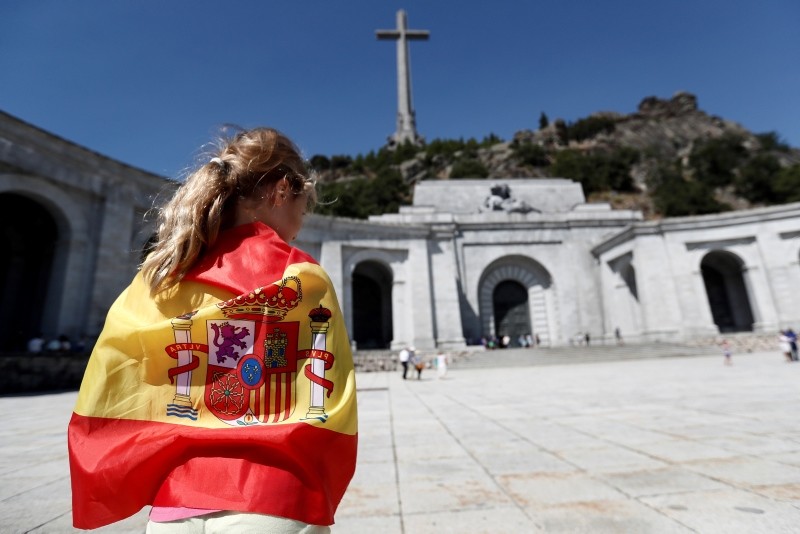 A woman is wrapped in a Spanish national flag on the esplanade of the El Valle de los Caidos (The Valley of the Fallen) memorial complex in the town of San Lorenzo del Escorial, 40 kilometers from Madrid, Spain, 21 August 2018. (EPA Photo)
by Aug 26, 2018 12:00 am

The family of Spain's late former fascist dictator Francisco Franco will use all possible legal means to prevent a government plan to move their ancestor's remains from a grand monument near Madrid, Spanish media said on Saturday.

During Franco's 1939-1975 rule - which remains a highly sensitive topic more than four decades after his death - tens of thousands of his enemies were killed and imprisoned in a campaign to wipe out dissent, and as many as 500,000 combatants and civilians died in the preceding civil war, which split the nation in two.

According to several national newspapers, seven grandchildren of Franco issued a statement expressing their "firm and unanimous" opposition to the exhumation.

The statement, reported in El Pais, El Mundo and La Vanguardia among others, was a response to a decree passed on Friday to reduce the risk that legal claims could impede the plan, a longstanding ambition of the ruling Socialists.

The Valley of the Fallen site, where Franco and tens of thousands of victims of Spain's 1936-39 civil war lie, has been criticized as Europe's only remaining monument to a fascist leader.

It was not immediately clear what legal avenues are open to Franco's descendants in the face of a decree that needs to be approved by parliament, but is unlikely to be voted down.

The statement said the family hoped the Benedictine order in charge of the site, which is marked by a 152-meter (500 ft) high cross, would prevent the state's "vengefulness", the papers said.

The decree gives the family 15 days from the end of August to decide where they want the remains to be taken, or cede that decision to the government.

"If an exhumation were to be performed against our will, we would demand that (the remains) are delivered to us so that we can proceed with a Christian burial," the family's statement said.