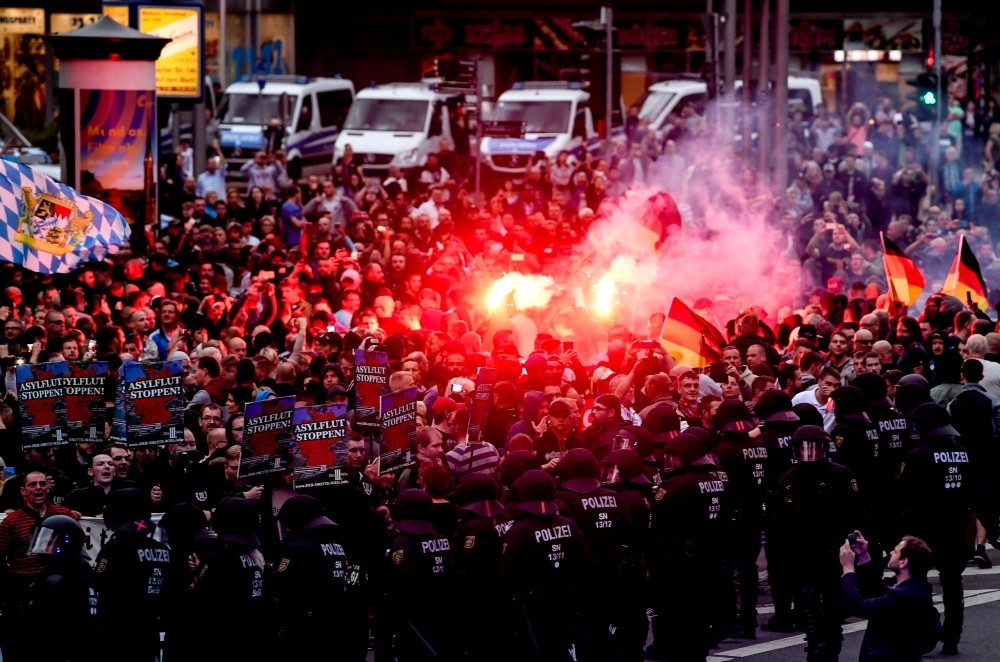 Germany has been shaken by clashes between neo-Nazis and left-wing counterprotesters in the eastern city of Chemnitz that left six people injured, revealing growing far-right violence in the country

Germany was reeling yesterday as anti-migrant sentiment reared its head with far-right protests degenerating into attacks against foreign-looking people, adding fuel to an already explosive debate over migrants.

The protest late Monday, sparked by the killing of a 35-year-old German man in an altercation with migrants over the weekend, erupted into clashes between neo-Nazis and left-wing counterprotesters. Six people were injured on Monday as pyrotechnics and other objects were hurled by the far-right camp as well as anti-fascist counterprotesters in the eastern German city. Police also reported assaults by extremists against at least three foreigners on Sunday, while investigations were opened in 10 cases of the protesters performing the Hitler salute.

The German federal government is ready to provide police assistance to the state of Saxony if asked, Interior Minister Horst Seehofer said yesterday amid growing concerns about the state's ability to contain violence. Seehofer, leader of the Bavarian conservatives, said public concern about the stabbing of a German man was understandable, but there was no place in German society for calls to violence or violent acts.

"The police in Saxony are in a difficult situation. If requested, the federal government is ready to make police support measures available," Seehofer said in a statement, Reuters reported.

Oliver Malchow, head of the German Police Federation (GdP) trade union, told German newspaper Neue Osnabruecker Zeitung that thousands of police staff cuts in recent years were responsible for the lack of control over right-wing violence. "The state has failed when it comes to domestic security because it massively reduced staff numbers," Malchow told the newspaper, adding that 20,000 new positions were required to remedy the situation, as reported by dpa.

Malchow pointed to a growing trend of vigilantism in Germany, saying: "When the state is perceived as no longer able to protect citizens, citizens take the law into their own hands and start to rely on self-defense militias and vigilantism."

The eastern state of Saxony, where Chemnitz is located, has long been a hotbed of anti-migrant sentiment. The far-right Alternative for Germany party received almost a quarter of the vote in Chemnitz last year.

The opposition Green party accused Germany's interior minister, Seehofer, of fanning anti-migrant sentiment in recent months and urged him to think about resigning in the wake of the violence.

Foreign Minister Heiko Maas expressed concern that Germany's reputation could suffer as a result of violent far-right protests. "We have to keep in mind that these are pictures that will be seen abroad," Maas told reporters in Berlin. "But I don't think that what was seen there even comes close to reflecting the reality in Germany. I firmly believe that the majority of people living in this country want an open and tolerant country." Maas said it was up to authorities to investigate the killing and hold those responsible to account.

Green lawmaker Konstantin von Notz told the news portal t-online.de that the violence in Chemnitz recalled events in other parts of eastern Germany during the early 1990s, when authorities failed to stop far-right mobs from attacking migrants.