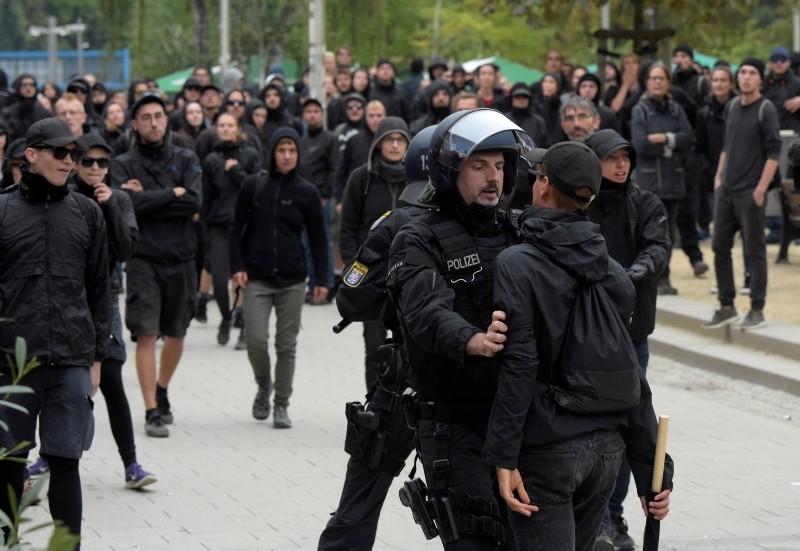 More than 1,200 policemen kept watch over the rallies in the eastern city, where deep divisions over Merkel's 2015 decision to welcome a million asylum-seekers have flared up since the killing of the 35-year-old man six days ago.

Leftist protesters started a march under the slogan 'Heart instead of Hate' at 1300 GMT in the center of Chemnitz, which was known as Karl-Marx-Stadt under Communist rule in East Germany as a homage to its industrial past.

At the other end of town, far-right demonstrators gathered near a large bust of the father of Communism before starting a march through the city. Riot police watched from a distance.

Merkel, who on Friday wrapped up a three-day visit to Africa, has not yet commented on the events in the city, near the Czech border.

"Where is she? Traveling in Africa," said a grey-haired man addressing the anti-immigrant crowd. "She should come here and face us citizens."

Supporters of far-right groups, including PEGIDA and Alternative for Germany (AfD), say their march is to mourn the man who was stabbed to death and condemn what they say is government inaction in the face of rising migrant crime.

Their leftist opponents accuse them of using the murder to stoke racial hatred against migrants and refugees.

"Who was the stabbing victim?," asked a woman in her 50s at the leftist demonstration, declining to give her name. "The far-right is exploiting his death by saying: 'A German has been murdered.' But he was an anti-fascist and people outside the city don't know that."

German police have said little about the man and the circumstances surrounding his murder.

Hundreds of far-right protesters clashed with police and hounded migrants in the streets of Chemnitz last Sunday after authorities said a Syrian and an Iraqi have been detained as suspects in the fatal stabbing.

Images of skinheads raising their arms for a Hitler salute, chasing anyone they saw as outsiders and wrestling riot police to the ground were a painful reminder for many Germans that not everyone has learned the lessons of the country's Nazi past.

The leaking of the arrest warrant for one of the two suspects to PEGIDA raised concerns that some justice officials in the state of Saxony, where Chemnitz is located, were sympathetic to the far-right.

Foreign Minister Heiko Maas, whose center-left Social Democrats (SPD) hold the mayor's office in Chemnitz and helped organize Saturday's leftist march, said on Twitter that Germans had a special duty to stand up against any form of fascism.

"When people are once again roaming our streets with the Hitler salute, our history mandates us to stand up for democracy," he wrote.

The influx of more than 1.6 million people seeking asylum in the last four years, mainly Muslims from Syria, Iraq and Afghanistan, has already changed Germany's social and political landscape.

The AfD, which says Islam is incompatible with the German constitution, entered the national parliament for first time in an election last year, securing third place after stealing voters from both Merkel's conservatives and the SPD.

After the stabbing in Chemnitz, its leaders said the violent riots that followed were understandable.