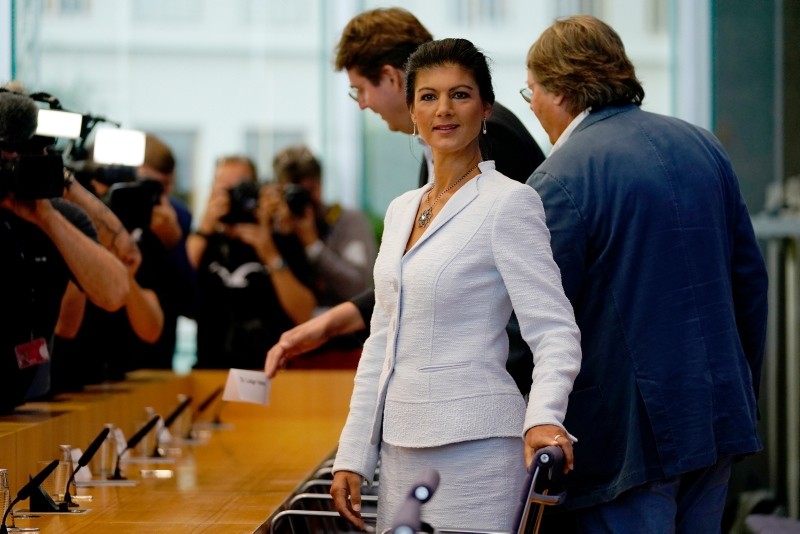 German politician Sahra Wagenknecht of the hard-left Die Linke party launched a new leftist political movement on Tuesday amid a growing challenge from the right in Germany and a rise of populist parties across Europe.

Four weeks after the Aufstehen website went live, the movement "Aufstehen" (Stand up) has surpassed 101,700 supporters. That figure rose by more than 15,000 over the past week.

Speaking at a press conference in Berlin, Wagenknecht said the people of Germany "no longer feel represented by those in power."

"In a country where, despite economic growth, 40 per cent of residents have less net income than 20 years ago, democracy is no longer working," Wagenknecht said.

The leftist leader referenced recent right-wing protests in eastern German cities including Chemnitz, saying, "I am tired of surrendering the streets to the [anti-Islam movement] Pegida and the [right-wing] Alternative for Germany."

She said ahead of its launch that the movement would draw from the success of other leftist movements including those of US Democrat and former presidential aspirant Bernie Sanders and Labour leader Jeremy Corbyn in Britain.

Oskar Lafontaine, Wagenknecht's husband and the former head of Die Linke, told dpa that recent right-wing extremist rallies in the eastern city of Chemnitz were taking place for reasons more complex than the recent influx of refugees into Germany.

"The discontent has been building not only because of the refugee question, but because of the disintegration of society, cuts to welfare spending and the dissatisfaction that has risen steadily as a result," Lafontaine said.

In light of tanking support for the center-left Social Democrats (SPD) in contrast with the record highs reached by far-right, anti-immigrant Alternative for Germany (AfD), Wagenknecht has repeatedly called for a new populist leftist movement.

Especially in eastern states, many former Die Linke voters have defected in favor of the AfD because they feel overlooked by the established political parties and the federal government in Berlin.

Wagenknecht said she hopes get backing for her movement from her own party, the SPD and the environmentalist Greens. But the leaders of those parties have warned that a new movement on the left risks creating divisions among Germany's leftist parties.

Several politicians in the SPD released a joint statement on Monday stating their support of Wagenknecht's new movement, saying "as many followers of the political left as possible should join" to create "a more just, more sustainable society."

However, according to a poll released Tuesday, nearly two-thirds of Germans do not believe in the movement's future success.

Sixty-two per cent of respondents to a poll conducted by Civey said Aufstehen will not survive in the country's political landscape.

Less than a fifth (19.8 per cent) of the 5,000 respondents to the survey, published by news website t-online.de, said they believed Aufstehen has a chance of establishing itself as a political force.