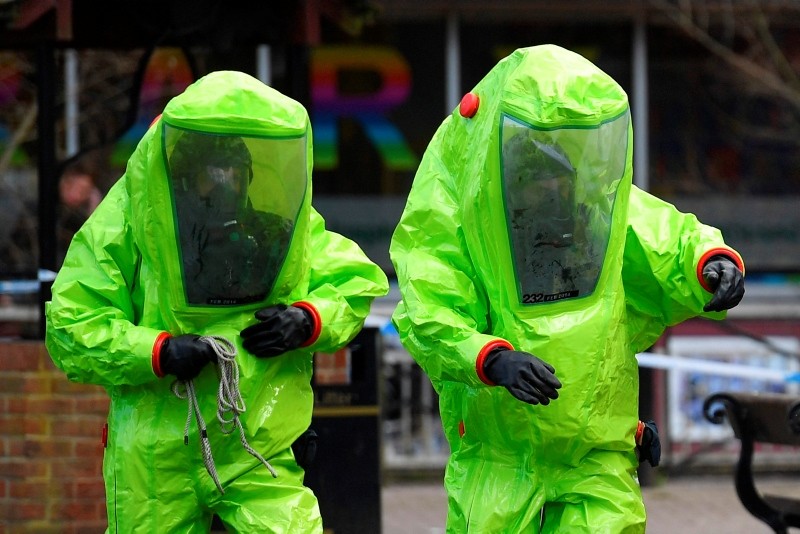 Members of the emergency services in biohazard suits work to afix the tent over the bench where a man and a woman were found on March 4 in critical condition at The Maltings shopping center in Salisbury, southern England, March 8, 2018. (AFP Photo)
by Daily Sabah with Agencies Sep 05, 2018 12:00 am

British prosecutors said Wednesday they have sufficient evidence to charge two Russian nationals with conspiracy to murder former Russian spy Sergei Skripal and his daughter Yulia in England in March.

A European arrest warrant has been issued for the two Russians who were named as Alexander Petrov and Ruslan Boshirov, the prosecutors said.

"We will not be applying to Russia for the extradition of these men as the Russian constitution does not permit extradition of its own nationals," Sue Hemming, director of Legal Services at the Crown Prosecution Service.

Novichok contamination was found in the London hotel room where the two men stayed, he said.

According to the police, the suspects arrived in London from Moscow on March 2 and returned to Russia on March 4.

In her address before the Parliament, British Prime Minister Theresa May said the suspects were Russian military intelligence officers almost certainly acting with senior-level state approval.

"Based on the body of intelligence, the government has concluded that the two individuals named by the police and the CPS (Crown Prosecution Service) are officers from the Russian military intelligence service also known as the GRU," May told parliament.

"This was also not a rogue operation. It was almost certainly approved outside the GRU, at a senior level of the Russian state."

Sergei Skripal, 66, and his daughter Yulia were found slumped unconscious on a public bench in the English city of Salisbury on March 4. Britain said they were poisoned with a military-grade nerve agent first developed by the Soviet Union. Russia has denied it had anything to do with the first known use of such a toxin on European soil since World War Two.

The poisoning has plunged relations between the West and Russia to their lowest ebb since the Cold War, with more than two dozen Western allies expelling over 150 Russian diplomats in a show of solidarity with Britain and Russia responding in kind.

In Moscow, Russia's spymaster claimed the poisoning was staged by U.K. and U.S. intelligence agencies.