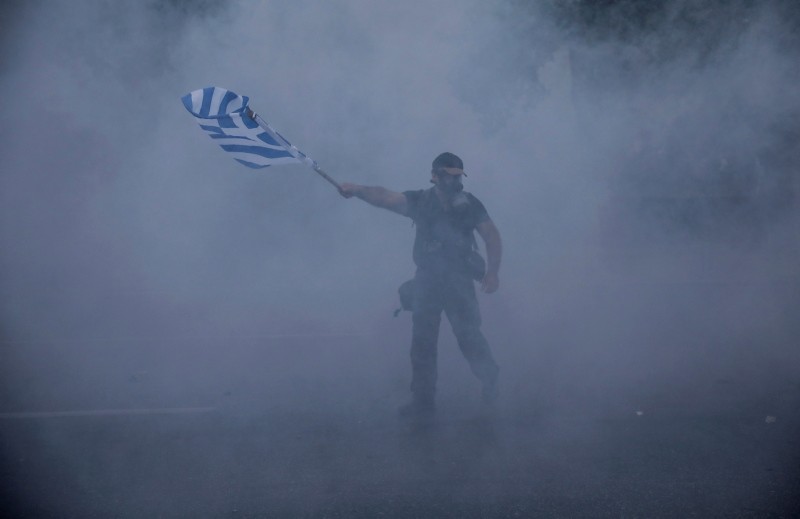 A protester waves a Greek flag amid tear gas smoke during clashes at the northern Greek city of Thessaloniki, Saturday, Sept. 8, 2018. (AP Photo)
by Compiled from Wire Services Sep 08, 2018 12:00 am

Greek police fired tear gas at demonstrators in the northern city of Thessaloniki where the Prime Minister Alexis Tsipras was scheduled to deliver a speech later Saturday.

Over 7,000 people are demonstrating in the city in separate protests against the government's economic policies, and in opposition to a recent diplomatic agreement aiming to end a quarter-century name row with neighboring Macedonia.

Officers kept the protesters at bay, but the group approached the fairgrounds from another direction and attacked officers with rocks and others items.

Opposition parties and unions dispute that the end of Greece's third bailout last month leaves much cause for celebration.

"(Greeks) believe that austerity is not over. All that has ended is the obligation of creditors to give the country money... and a tough tutelage remains," said Yiannis Panagopoulos, head of Greece's leading union GSEE.

Unemployment has fallen below 20 percent for the first time since 2011, but most Greeks continue to struggle under heavy taxation and drastically reduced income.

The 44-year-old Tsipras is trying to bounce back from poor ratings exacerbated by Greece's worst fire tragedy in July in which nearly 100 people died near Athens.

He reshuffled his cabinet last month, and last week indicated he would bolster labor safeguards and raise the minimum wage.

Elections are not scheduled for another year but there is speculation a snap ballot could be held by May.

The preliminary agreement with Macedonia in June, to be confirmed by a referendum by Skopje later this month and a Greek parliamentary vote early in 2019, will see the Balkan state renamed North Macedonia.

The tiny landlocked country had joined the United Nations in 1993 as the Former Yugoslav Republic of Macedonia.

Greece also has a northern province named Macedonia, the heart of Alexander the Great's ancient kingdom, and many Greeks fear the deal will officially enable Skopje to lay claim to their cultural heritage