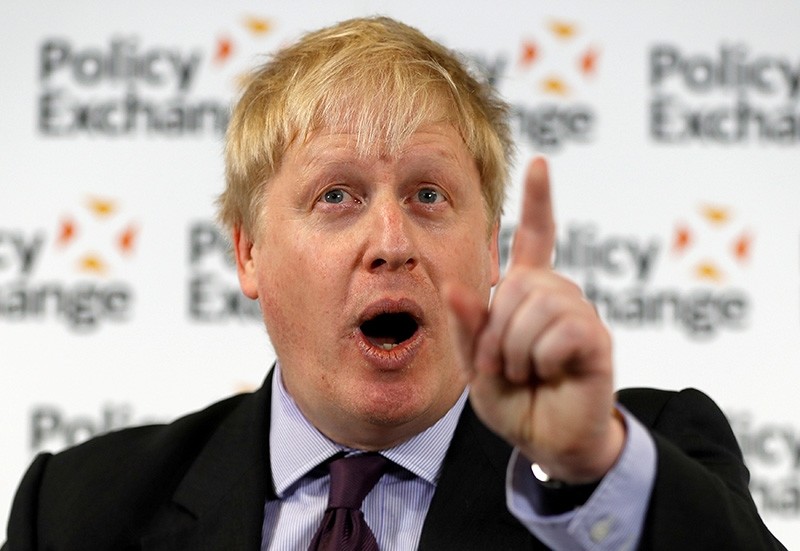 Former British Foreign Secretary Boris Johnson has compared Prime Minister Theresa May's plan for Brexit to putting the country's constitution in a "suicide vest" and handing the detonator to the European Union — remarks that drew condemnation from colleagues on Sunday.

The attack, and Johnson's choice of metaphor, widened the divide in the governing Conservative Party over Brexit.

Johnson, a strong supporter of Brexit, quit May's government in July after rejecting her proposal for close economic ties with the bloc after the U.K. leaves next year. His article in the Mail on Sunday ramped up speculation that he plans to challenge her leadership.

Johnson said May's plan, which would keep the U.K. aligned to EU regulations in return for free trade in goods, was a "humiliation" and amounted to "agreeing to take EU rules, with no say on those rules."

He also said that by agreeing that the U.K.'s Northern Ireland must effectively remain in a customs union with the bloc in order to avoid a hard border with EU member Ireland, "we have wrapped a suicide vest around the British constitution — and handed the detonator" to the EU.

Foreign Office Minister Alan Duncan tweeted that the comments marked "one of the most disgusting moments in modern British politics" and should be "the political end of Boris Johnson."

Conservative lawmaker Tom Tugendhat, a former army officer, said on Twitter that he had seen the aftermath of a suicide bombing in Afghanistan, and "comparing the PM to that isn't funny." He said that Johnson should "grow up."

Tousle-headed Johnson is a popular but divisive figure known for Latin quips and verbal blunders that have included calling Papua New Guineans cannibals and accusing people in Liverpool of "wallowing" in victimhood. Last month, he was criticized for comparing Muslim women who wear face-covering veils to "letter boxes."

After Britain's 2016 EU membership referendum, Johnson pulled out of a race to lead the Conservatives, which was won by May. His increasingly vocal attacks on the prime minister suggest that he wants a second shot at the top job.

Last week, Johnson and his wife Marina Wheeler announced they were divorcing after 25 years of marriage — a move some saw as an attempt to neutralize potential stories about his private life before a leadership campaign.

Johnson's relationships have landed him in trouble in the past. In 2004, he was fired as Conservative vice chairman after lying about an extramarital affair.

His personal life was back in the headlines Sunday, with tabloids running stories about Johnson's relationship with a former Conservative staffer.

Many expect May to face a leadership challenge soon if faltering Brexit negotiations with the European Union don't improve. Britain is due to leave the EU on March 29, but divorce talks have foundered amid Conservative Party divisions over how close a relationship to seek with the bloc.

Johnson and other supporters of "hard Brexit" oppose May's plan, arguing that a clean break with the bloc will allow Britain to strike new trade deals around the world.

Rivals say it would pummel the economy by creating barriers to trade with the EU, the U.K.'s biggest trading partner.

Amid the uncertainty, the U.K. government has stepped up planning for a "no-deal" Brexit, in which Britain crashes out of the bloc on March 29 with no agreement in place on future relations. Government officials concede that could disrupt trade, transport and a host of other sectors of the economy.

Carolyn Fairbairn, head of business group the Confederation of British Industry, said Sunday that a no-deal Brexit would be a "catastrophe" that would leave thousands of businesses unsure whether they could continue trading with Europe.

A document drawn up by the National Police Co-ordination Center and published in the Sunday Times warned that a no-deal Brexit could lead to shortages of goods and higher prices, with the potential for "widespread protest which could then escalate into disorder."