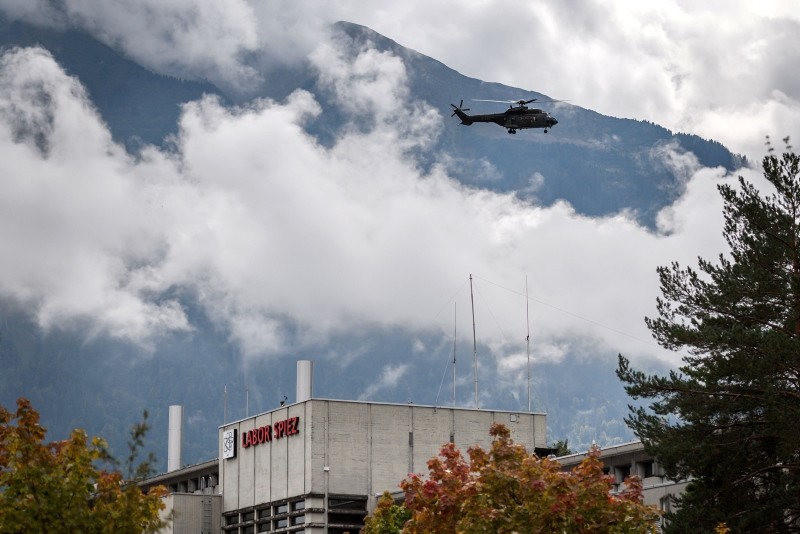 A Super Puma helicopter of the Swiss Air Force flight above the Spiez Laboratory, Swiss Federal Institute for NBC-Protection (nuclear, biological, chemical) on September 14, 2018 in Spiez, 40km from Swiss capital Bern. (AFP Photo)
by Sep 14, 2018 12:00 am

At the time, Spiez was analyzing data related to poison gas attacks in Syria, as well as the March 4 attack using the nerve agent Novichok on Russian double agent Sergei Skripal and his daughter in Salisbury, they reported.

The laboratory does analytical work for the Hague-based Organization for the Prohibition of Chemical Weapons (OPCW).

The two were detained "early this year" by Dutch military intelligence (MIVD) working together with several other countries, the newspapers reported.

"The duo, according to sources within the investigation, carried equipment which they wanted to use to break into the computer network" of the Spiez laboratory.

Exact details of the alleged agents' arrest are unknown.

But on March 26, Dutch Prime Minister Mark Rutte announced that his cabinet had decided to expel "two Russian intelligence workers from the Russian embassy" as a result of the Skripal attack, without giving further details.

Swiss intelligence officials Friday confirmed they were aware of the incident.

'Known to the authorities'

"The case of the Russian spies discovered in The Hague and then expelled from The Hague is known to Swiss authorities," Isabelle Graber, spokeswoman for the Swiss intelligence services (SRC), told AFP.

The Swiss spy agency "actively participated in this operation in collaboration with its Dutch and British partners in prevention of illegal actions against critical Swiss infrastructure," she said.

Dutch intelligence services declined to comment when contacted by AFP, saying "we don't give information about operations."

However, in April Russian Foreign Minister Sergei Lavrov accused the OPCW of "manipulating" the results of the Skripal probe by omitting findings from the Spiez laboratory.

According to the results from Spiez, the samples sent by the OPCW contained a nerve agent called "BZ" which was manufactured by the West, Lavrov said, citing "confidential information."

Two men who were accused by Britain of being GRU agents involved in the murder attempt on Skripal insisted in an interview that they were merely tourists who had come to visit Salisbury cathedral.

But the two men in the interview, named by British security services as Alexander Petrov and Ruslan Boshirov, "were not the two agents intercepted" by the Netherlands, the papers said.