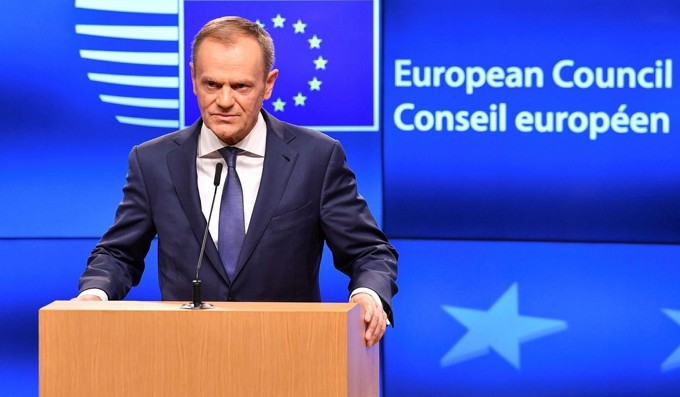 The European Union must end the "blame game" on migration and instead focus on working more with foreign countries and further strengthening its border to bring down arrivals, the chairman of the bloc's leaders said.

The 28 EU leaders are meeting in the Austrian city of Salzburg to tackle migration once again, an issue that has badly damaged their unity in recent years.

They will seek more ways of reducing immigration and, right before chairing the talks, EU Council President Donald Tusk said progress had been made since Mediterranean arrivals peaked in 2015. He said fewer than 100,000 migrants had reached Europe without necessary documentation this year.

"In fact, this is less than in the years before the migration crisis," Tusk said.

"I will call on EU leaders to stop the migration blame game. Despite aggressive rhetoric, things are moving in the right direction," he told reporters in Salzburg.

More than a million refugees and migrants arrived from the tumultuous Middle East and poor Africa in 2015, stretching public services and leading to a rise in anti-immigrant parties challenging liberal democracies around the EU.

The EU has since struck deals with countries from Turkey to Lebanon to Libya, offering them money and aid in exchange for keeping a tighter lid on migration to Europe. It has also tightened its borders and made it harder to win asylum.

The leaders will discuss on Wednesday a proposal by the bloc's executive arm to raise the number of guards at the EU's border agency to 10,000.

But the plan faces some opposition from member states such as Italy that fear a pan-EU body would be allowed to overrule them in running their own borders.

The EU is also courting Egypt for a migration deal. Tusk said the EU would hold a summit with the Arab League in Egypt in February.

German Chancellor Angela Merkel said on arriving for the talks with her EU peers that Africa was "the key relationship" for the bloc.

The EU has already put in place one such agreement with Libya, where it has offered money, equipment and training for the Tripoli border guard to help them prevent people embarking on the often perilous journey to Europe.

The accord has been criticized by human rights groups as violating the international humanitarian law and aggravating the suffering of people who are already distressed. But the EU's political priority is clear and it has defended the deal.

Despite a steep drop in immigration numbers since 2015, political aftershocks are still reverberating with member states at loggerheads over how to distribute new arrivals and share the burden of integrating migrants already in the EU.

Italy's firebrand far-right interior minister, Matteo Salvini, has excoriated the EU over its disarray on migration.

A majority of Europeans support taking in refugees although many disapprove of how the EU has handled a record influx, according to a new survey by the Pew Research Center.