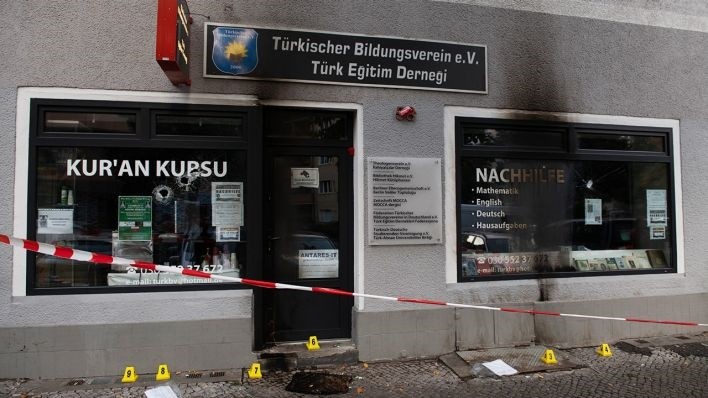 A Turkish educational association was targeted early Thursday in an arson attack in the Neukölln district of German capital Berlin. Unknown perpetrators threw stones at the windows of the association and sprayed the slogan "For Afrin – Rise up" on the sidewalk, German media reported.

German media also said that the association could have been attacked by PKK sympathizers who oppose to Turkey's operation in northwestern Syria's Afrin against the People's Protection Units (YPG) - the Syrian affiliate of the PKK terror group, which has waged war against Turkey for more than 30 years.

No injuries were reported in the incident as residents were able to extinguish the flames. Fire experts of Berlin's criminal investigation office were at the scene this morning, securing traces for the ongoing probe.

Police confirmed that the fire was "willfully" staged by one or more suspects.

Speaking to Anadolu Agency (AA), Rüştü Kam, head of the Turkish association, said that the police phoned him early yesterday and informed him about the incident. He also drew attention to the increased number of attacks on the Turkish community in the country, requesting more protection for their rights.

Turkey's Operation Olive Branch, which was launched on Jan. 20 to remove the YPG and Daesh terrorists from Afrin, has repeatedly led to massive pro-PKK protests in Germany.

Some of the protests ended up violent with vehicles being damaged by paints and several arson attacks. Last March, unknown perpetrators threw an incendiary device into a mosque in Berlin's Reinickendorf district. Police are still investigating the politically motivated offense.