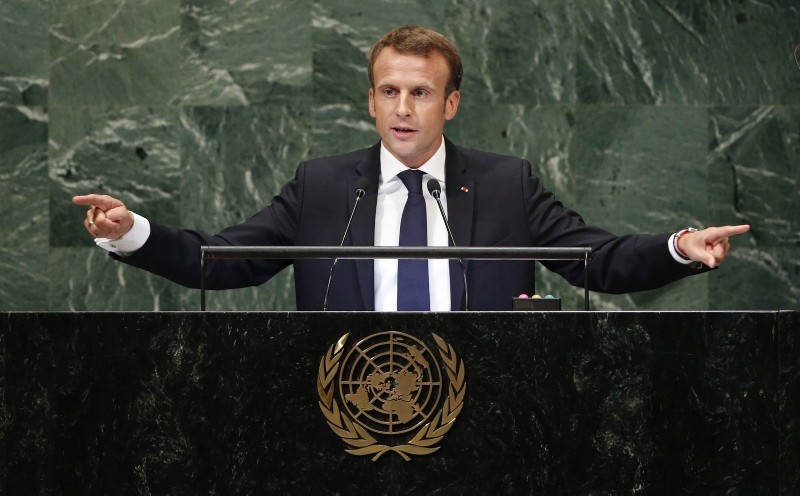 French President Emmanuel Macron reacts as he waits to be introduced to address the General Debate of the General Assembly of the United Nations at United Nations Headquarters in New York, September 25, 2018. (EPA Photo)
by Compiled from Wire Services Sep 25, 2018 12:00 am

French President Emmanuel Macron rejected on Tuesday said that trade agreements will be contingent on membership in the Paris climate pact, in a clear bid to pressure the United States.

"We will no longer sign commercial agreements with powers that do not respect the Paris accord," Macron told the U.N. General Assembly without explicitly mentioning his U.S. counterpart Donald Trump's withdrawal from the global framework.

Macron also called for "dialogue and multilateralism" on Iran, in a thinly veiled response to Trump's push for tough, U.S.-led sanctions.

Speaking shortly after Trump, the French leader credited the 2015 accord rejected by Trump with curbing the nuclear program of Iran.

"What will bring a real solution to the situation in Iran and what has already stabilized it? The law of the strongest? Pressure from only one side? No!" Macron said.

"We know that Iran was on a nuclear military path but what stopped it? The 2015 Vienna accord," he said.

Trump has withdrawn from the seven-nation agreement negotiated under his successor Barack Obama, calling it a "disaster" and instead ramping up pressure on Iran including through renewed sanctions.

Supported by Israel and Saudi Arabia, Trump has sought to roll back Iranian influence around the Middle East including in war-ravaged Syria.

But Macron said: "As I was saying a year ago, today we should not aggravate regional tensions but rather through dialogue and multilateralism pursue a broader agenda that allows us to address all the concerns caused by Iranian policies -- nuclear, ballistic, regional."