Merkel's power on the wane after veteran ally ousted 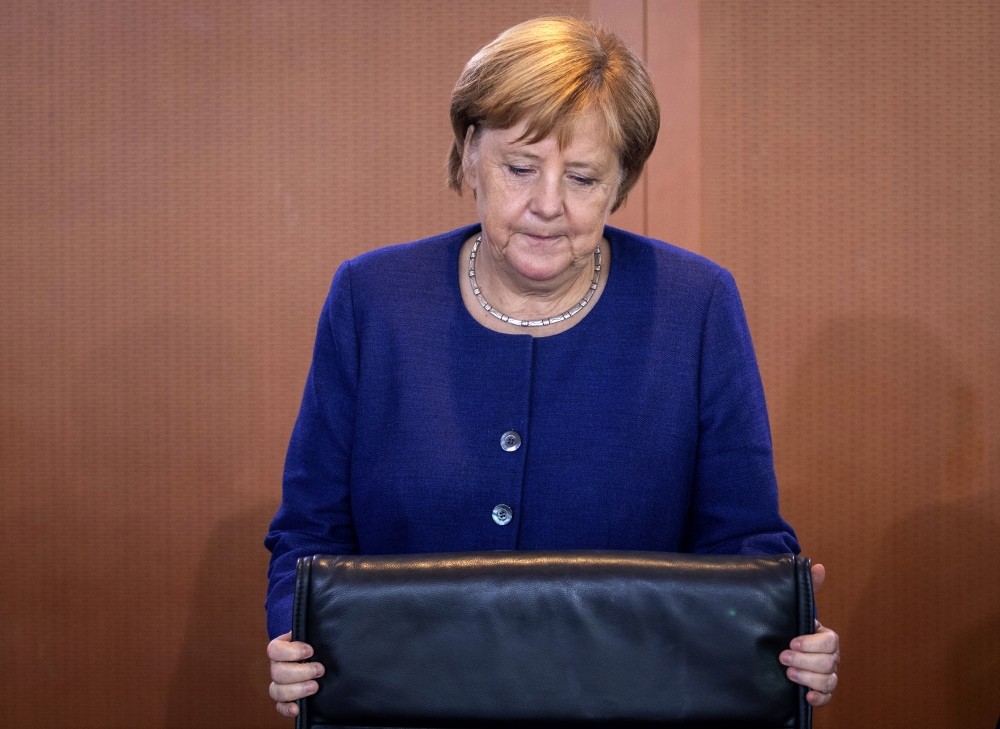 German Chancellor Angela Merkel takes her seat prior to the weekly cabinet meeting, Berlin, Sept. 26.
by Compiled from Wire Services Sep 27, 2018 12:00 am

German politicians and media questioned how long Angela Merkel could carry on as chancellor yesterday after her conservatives ditched a long-standing ally as head of the parliamentary party, defying her wishes and dealing a blow to her waning authority.

The upset, before an Oct 14 election in Bavaria in which her CSU conservative allies face heavy losses, follows the third crisis in as many months for her loveless coalition with the Social Democrats (SPD). "Can Merkel Still be Chancellor?" splashed top-selling Bild with a photo of the 64-old pulling a grim face.

SPD lawmaker Thomas Oppermann tweeted it was an "uprising against Merkel" and Free Democrat Alexander Graf Lambsdorff said it was "the beginning of the end of the grand coalition."

In an unexpected vote that underscored growing discontent among conservative lawmakers after 13 years of Merkel as German chancellor, Volker Kauder, lost out to Ralph Brinkhaus in a secret ballot for the party post.

However, many commentators point out that Merkel's continued weakness will result in little change in terms of policy.

Lawmakers had gone against the wishes of Merkel and CSU leader Horst Seehofer who had both called on them to re-elect Kauder, a trusty lieutenant who over 13 years helped secure the support of parliamentarians in the euro- and migrant crises. Many conservatives are still angry over Merkel's decision three years ago to let in more than a million migrants. "The vote shows a desire for renewal," conservative premier of the state of Schleswig Holstein Daniel Guenther said. "There was clearly a certain discontent over national politics," he told broadcaster NDR, as reported by Reuters. He added that Brinkhaus wanted to give more weight to lawmakers' views in policy decisions.

Brinkhaus is not widely viewed as a rebel who wants to oust Merkel. Although he is slightly to the right of Merkel and more hawkish on financial policy, he has so far been at pains to stress he is on her side.

The latest violence in Chemnitz exposed deep divisions in Germany over Merkel's 2015 decision to open the country's doors to around a million people seeking asylum, mainly Muslims from Syria, Iraq and Afghanistan. That decision has also been blamed for fueling the rise of the far-right Alternative for Germany (AfD), which became the largest opposition party after an election last year that weakened both Merkel's conservatives and the SPD. It is expected to come third in Bavaria on Oct. 14.

The migration issue has driven a deep wedge through Germany and weakened Merkel, who has led the country for 13 years. Most observers say her current fourth term will likely be her last. Although new arrivals are down from their 2015-2016 peak, she was forced to make major concessions to Interior Minister Seehofer in July to tamp down his rebellion by hammering out bilateral agreements with EU partners to take back asylum seekers who later arrived in Germany. Although her critics have been emboldened by a string of high-profile crimes allegedly committed by migrants, defenders of Merkel's more welcoming stance toward refugees have mobilized as well.