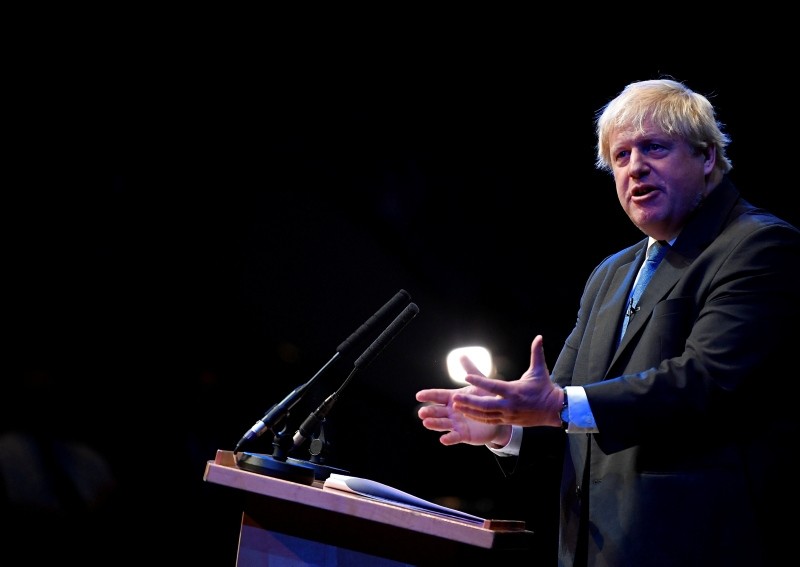 Britain's Boris Johnson on Tuesday launched a blistering attack on Prime Minister Theresa May's Brexit plan at a fractious party conference that came as Brussels pressed London for a compromise on leaving the EU.

Mixing jokes with biting one-liners that always stopped short of attacking May herself, the former foreign minister called her strategy "dangerous and unstable", as well as a "political humiliation".

"My fellow Conservatives, this is not democracy. This is not what we voted for. This is an outrage," he said in a 35-minute address that was interrupted by repeated bursts of laughter and cheers.

The wide-ranging speech, which many saw as Johnson's audition for May's job, was attended by some 1,500 people who packed a conference hall room after queuing for hours.

Johnson did little to douse suspicions of an eventual leadership bid, using his characteristic swagger and wit to pick apart the faults of May's proposal -- while not actually spelling out what Britain should do instead.

He said he wanted "to back Theresa May" by forcing her to reverse her attempts to keep close economic ties with the European Union once Britain leaves in March.

May appeared intent on stealing Johnson's spotlight, scheduling a flurry of morning interviews at which she unveiled a new immigration policy a day ahead of schedule.

Free movement of EU workers was a key issue in the 2016 vote for Brexit, and May confirmed that Europeans would be treated the same as non-EU citizens in future.

May's public battle with Johnson comes only two weeks before she must return to Brussels in a bid to break the Brexit deadlock and reach a deal.

The prime minister hinted at a possible compromise on how to keep the land border with Ireland open after Brexit, a key sticking point in the EU talks, on which London is due to publish new plans shortly.

Johnson was a leading campaigner for Brexit in the referendum. Even after being appointed foreign minister, he continually challenged May's EU strategy.

He quit in July in protest at her plan for Britain to follow EU rules for goods after Brexit, which she says will protect cross-border trade but he argues would keep London tied to the bloc well into the future.

Numerous eurosceptic Conservative MPs have already drawn big crowds in Birmingham as they offer their own idea for a looser trade arrangement with the EU.

He was mobbed by jostling cameras on arrival and chased by reporters as he walked, with his address airing live across the nation.

"It's important to support the only politician I can see who is actively campaigning to give people the Leave that they voted for," said Colette Wyatt-Lowe, 71, a councilor from the outskirts of London, while queuing to hear Johnson speak.

Johnson is known for his confrontational style, and before the event he was captured in a press photograph running through a field of long grass.

It clearly mocked May, who once said the naughtiest thing she had done was run through a field of wheat.

But Johnson's recent comments about her Brexit plan, calling it "deranged" and saying it strapped a suicide vest to the British constitution, have angered many fellow MPs.

Even former Brexit minister David Davis, a fellow eurosceptic who describes Johnson as a "great mate", said many of his ideas "are good headlines but not necessarily good policies".

Among the delegates, there is also unease about Johnson's public disagreements with May.

Mike Kay, a 34-year-old delegate from Manchester in northwest England, added: "He has a kind of charisma that so few others do. But he is very divisive, that's a problem.

"A large section of the country thinks he is a clown."