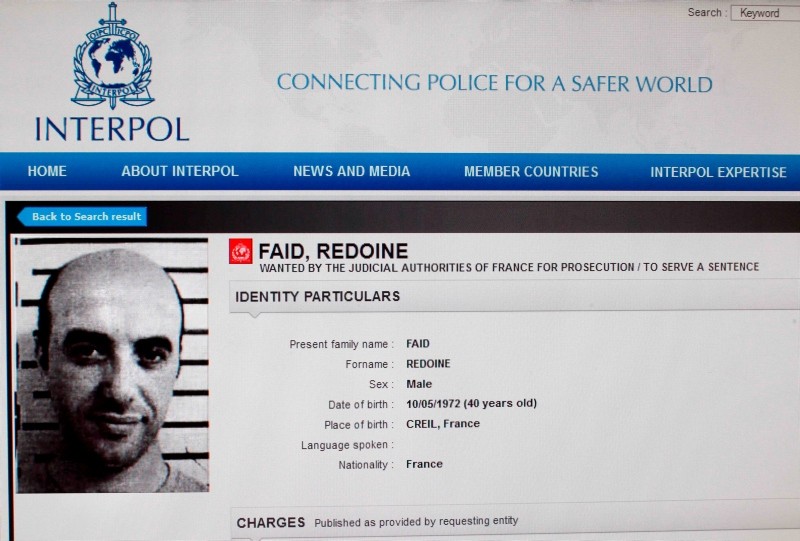 This file photo shows a reproduction of the Interpol website made on April 15, 2013 in Paris showing the international wanted person notice for Redoine Faid. (AFP Photo)
by Oct 03, 2018 12:00 am

A gangster who made a Hollywood-esque helicopter jailbreak was arrested in northern France on Wednesday after three months on the run, sources close to the case said.

Notorious French robber Redoine Faid was apprehended in the Oise region north of Paris along with his brother Rachid and two other family members, one source said, confirming earlier media reports.

A massive manhunt was launched after Faid's daring July 1 escape, in which two heavily armed accomplices used smoke bombs and angle grinders to break through doors and whisk him to a waiting helicopter.

Faid, a career criminal with multiple convictions for armed robbery who had escaped from prison once before, was sprung from the jail in Reau, 50 kilometers (30 miles) southeast of Paris.

Around 100 police were deployed to track down the 46-year-old, who has cited movie baddies such as Tony Montana in "Scarface" as an inspiration and said he discovered his "calling" at the age of 12.

Weapons were seized in the raid which unfolded calmly in the town of Creil in the early hours of Wednesday, according to the source.

Outgoing Interior Minister Gerard Collomb praised the local police force in a tweet for their "commitment, bravery and determination".

Faid, who previously escaped from prison in 2013 before being captured six weeks later, had been serving a 25-year term over a botched 2010 heist in which a policewoman was killed, though he claims her death was accidental.

The spectacular jailbreak saw two men posing as flight-school students, who had already taken an introductory flight, force a helicopter instructor at gunpoint to fly them to the jail.

The terrified pilot landed in the courtyard -- the only part of the prison not fitted with anti-helicopter nets.

A pair of black-clad men armed with assault rifles then alighted and set off smoke bombs before breaking into the visiting room, where Faid was meeting with his brother who was later taken into custody.

The wardens, who were unarmed, fled and raised the alarm. But within 10 minutes Faid was gone, cheered on by his fellow inmates.

The helicopter was found shortly afterwards in a suburb northeast of Paris, along with the pilot, who had been beaten and was taken to hospital in a state of shock.

Several days after his escape investigators found a stash of guns, masks and a cement cutter in the Oise region where Faid grew up, which they believed belonged to his gang.

Faid narrowly avoided capture on July 24 and had to abandon a car containing explosives after he was identified as one of two people who sped away when police tried to carry out a security check on their car north of Paris.

In early September police carried out searches targeting the robber's relatives, but made no arrests.

The escape, which brings to at least five the number of jailbreaks in France in the past three decades involving helicopters, prompted a heated debate about whether the country's prisons are secure enough.