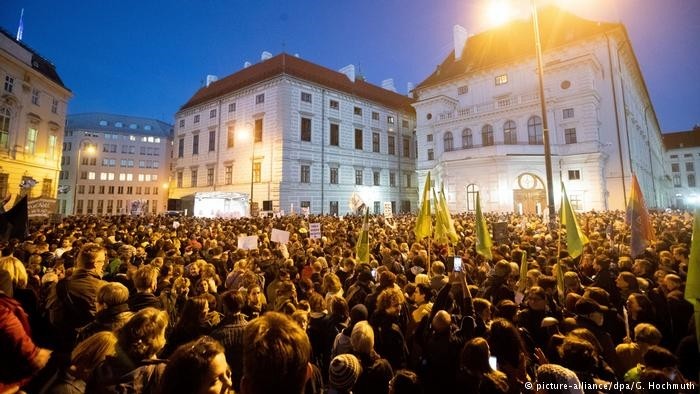 The political views of young people in Austria are sharply split, with the left organizing anti-right-wing government protests and the right maintaining faith in their youthful chancellor

Left-wing organizers have revived the weekly "Thursday protests" from the early 2000s to voice their sharp disagreement with the right-wing government of the conservative reactionary Austrian People's Party (ÖVP) and the nationalist Austrian Freedom Party (FPÖ).

The ÖVP-FPÖ coalition with 32-year-old Austrian Chancellor Sebastian Kurz at the helm has implemented numerous anti-immigration and other populist policies that have left both the opposition and their disunited backers in disarray since the historic election of Oct. 15, 2017.

To make matters worse, the protesters have failed to gain political momentum, since the last legislative election opinion polls showed support for both the ÖVP and the FPÖ has gone up significantly, while the numbers of the main opposition Social Democrats (SPÖ) party have remained frustratingly stagnant.

The policies and controversial but well-received rhetoric of the coalition government, as well as the fact that the FPÖ has been accused of being a xenophobic, anti-Semitic party of Nazi-sympathizers, has not made a good impression on the Austrian people, who say that they care more about the present and future rather than what a party had been doing before they had even turned 18.

Austria is unique among other Western nations, which have also seen a rise in reactionary, nationalist and populist politicians. While the younger generations in countries like Italy, Germany, France, Britain and Greece lean strongly toward liberal and far-left politics, the young people of Austria are behind the right's electoral success in their country.

This trend is not only evident in that fact that people in their early 20s and 30s are openly declaring their support for Kurz, but also for his more controversial Vice-Chancellor and FPÖ party leader, Heinz-Christian Strache.

The FPÖ itself has announced that its youth wing has "11,000 active members" and that "countless more are interested."

The right wing in Austria has generally had a lot of success with younger generations, even in previous elections. More specifically, the 47-year-old Austrian FPÖ presidential candidate Norbert Hofer, who lost to his opponent from the Greens, current President Alexander Van der Bellen, by a very small margin in May and April 2016 after two campaigns filled with controversy due to alleged voting fraud.

The left in Austria has also run other protest campaigns; some with unfortunate names such as "Grandmas against the Right," which, to say the least, was not a good strategy in terms galvanizing young voters. While Britain's vote to exit the European Union and U.S. President Donald Trump's victory in 2016 may have been largely attributed to baby boomers, Austria's own unconventional right rose to power not despite of but with the millennial vote included.

In Germany, for example, the large and sustained protests organized by anti-immigration campaigners and the Patriotic Europeans Against the Islamisation of the Occident (PEGIDA) were always met with similarly sized if not larger counter protests that sometimes even resulted in violence and chaos that had to be contained by the authorities.

Similar to Trump's "America First" policy, Kurz's supporters believe that he also wants to give Austria and its own citizens priority, and that he is not simply a tool of Brussels. Half of Europe, young and old, agrees with this sentiment, while less than half believe that the bloc is handling youth unemployment, immigration and the economy appropriately according to the EU's own statistics.

Eurosceptic sentiment has found Austria old friends and new political allies in the East, perhaps unsurprisingly with countries that also used to be under Habsburg rule until 1919, with Hungary, Poland, Slovakia and the Czech Republic and even Italy.

The leftist protesters are certainly feeling the full weight of defeat as the coalition implements its promised policies of change from the mainline.

There are other young supporters of the current government, however, who would have preferred that Kurz had not created a coalition with the FPÖ due to its controversial history and unforgiving rhetoric.

The FPÖ has also been unapologetic in its denunciation of what it says is the "Islamization of the West."

However, while it might have left a bad taste in their mouths, they have not revolted against Strache's appointment, facing the reality that without his voters, Kurz would have not been chancellor.