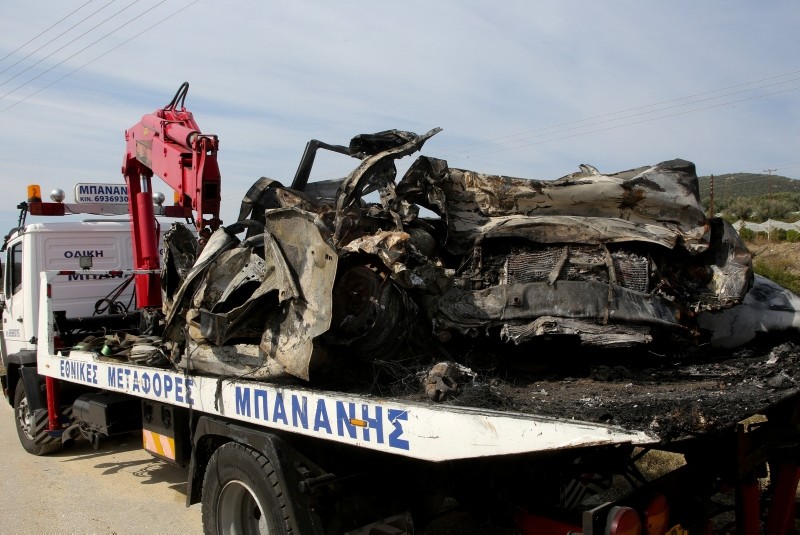 A crane removes the burnt vehicle where 11 people thought to be migrants died after colliding with a truck, in Kavala, Greece, October 13, 2018. (Intimenews/Elias Kotsireas via Reuters)
by Compiled from Wire Services
Oct 13, 2018 12:00 am

Eleven people died in northern Greece early Saturday after a mini-van thought to be carrying migrants crashed head-on with a truck and burst into flames, police said.

Firefighters recovered 11 bodies from the mini-van, which had been travelling towards Thessaloniki. All of the victims have been burned beyond recognition. The driver of the truck, which had been heading towards the town of Kavala, escaped the fire unscathed. The 39-year-old Greek man was treated for minor injuries in a hospital in northern Greece before being discharged.

Greek police said the car in which the migrants were packed had another vehicle's license plates and is suspected of having been used for migrant trafficking. It had failed to stop earlier Saturday when police officers tried to pull it over for a check, but it wasn't immediately clear how close to the site of the crash that it happened.

Ten of the victims were believed to be migrants who crossed into the Greece from Turkey. The 11th person was the driver and a suspected migrant smuggler, police said.

Greek authorities have been seeing an increase in people illegally crossing the Greek-Turkish border in recent months. Many are transported to Thessaloniki, where they head to police stations to be registered and apply for asylum.