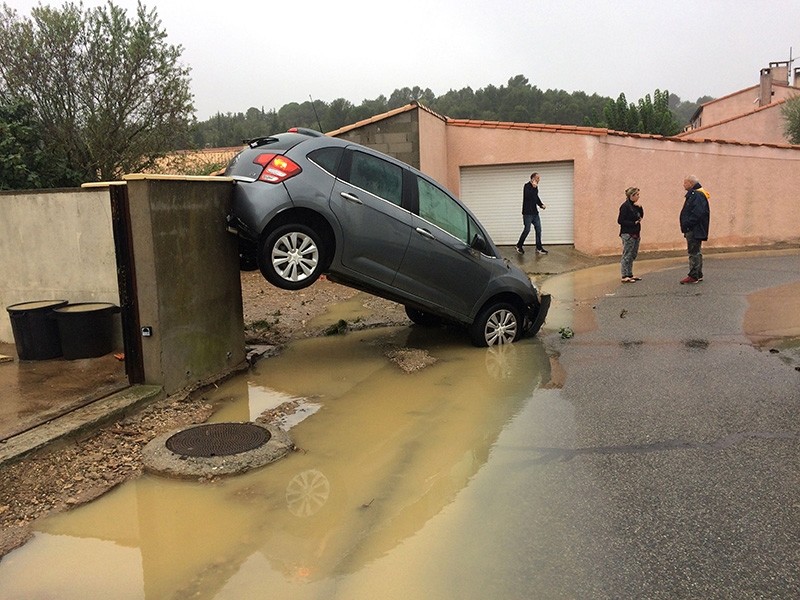 Flash floods swamped a number of towns and villages around the fortress city of Carcassonne, leaving a trail of overturned cars, damaged roads and collapsed homes.

Six helicopters were scrambled to help rescue people from the roofs of their homes, but bad weather was making operations difficult, the prefect of Aude, Alain Thirion, told BFM TV. Around 250 firemen and 100 police were involved in the effort.

"We have people stranded on rooftops. We're going to have to use aircraft to evacuate them because we cannot reach them by boat given the force of the water. It's too dangerous," he said.

One woman was swept to her death by rising waters in the Aude village of Villardonnel, and at least four died overnight in Villegailhenc, local authorities said. The authorities also said one person was missing, while five others were seriously injured.

One person was also injured when a house collapsed in Cuxac, local official Alain Thirion said on television.

In the villages north of Carcassonne, all roads were cut, schools closed, and people were asked to stay at home.

In Conques, there was up to two meters (6 feet) of water in the streets.

Six other departments were also hit by the storms from the eastern Pyrenees to Aveyron further north.

Water levels were expected to continue to rise in the area on Monday, with rain forecast until late in the morning. Schools in the area were closed and residents were told to stay at home.

Torrential rains are not uncommon in France at this time of year, but meteorologists have said exceptionally warm sea water along the Mediterranean coast may be intensifying the rains.

The year so far is France's hottest since 1900, according to the state meteorological service.