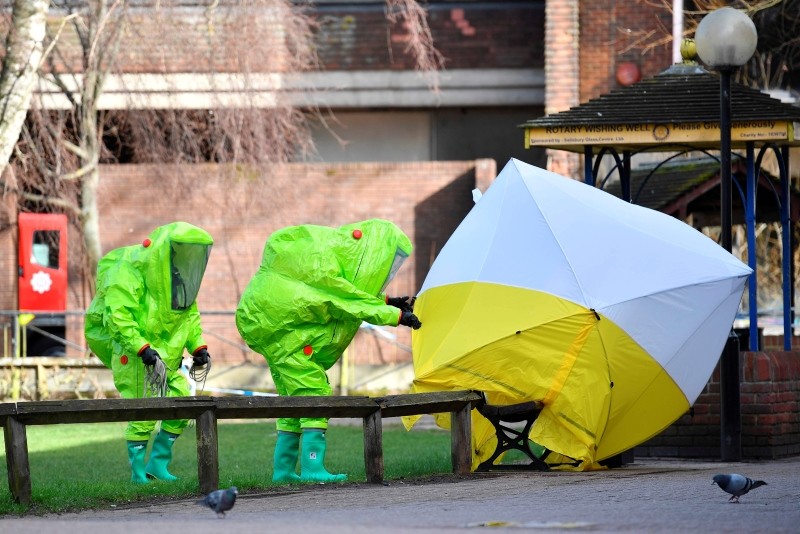 This March 08, 2018 file photo shows members of the emergency services in green biohazard suits near the bench where Sergei Skripal and his daughter were found on March 4 in critical condition in Salisbury, southern England. (AFP Photo)
by French Press Agency - AFP
Oct 15, 2018 12:00 am

The European Union on Monday set up a new sanctions mechanism targeting those who use and develop chemical weapons, as part of a crackdown in the wake of the Skripal attack.

The framework gives the EU the power to impose restrictive measures on anyone identified as being involved in the development or deployment of chemical weapons, regardless of their location or nationality.

Fears have been growing among world powers that the century-old taboo on the use of chemical weapons is being eroded, following the nerve agent attack on a former Russian spy in the United Kingdom and repeated uses of gas and banned substances in the Syrian conflict.

EU foreign ministers meeting in Luxembourg agreed to the new measures, which will freeze the assets held in the block by targeted individuals and organizations and ban them from traveling to any of the 28 member states.

"The restrictive measures target persons and entities who are directly responsible for the development and use of chemical weapons as well as those who provide financial, technical or material support, and those who assist, encourage or are associated with them," the European Council, which groups the member states, said in a statement.

"This decision contributes to the EU's efforts to counter the proliferation and use of chemical weapons which poses a serious threat to international security."

While Monday's decision sets up the framework to impose restrictive measures, for the moment no individuals or organizations have been sanctioned. Decisions on this will be taken at a later date.

The targeting of former Russian spy Sergei Skripal and his daughter by a Soviet-designed chemical agent called Novichok in the English town of Salisbury in March caused outrage around the world.